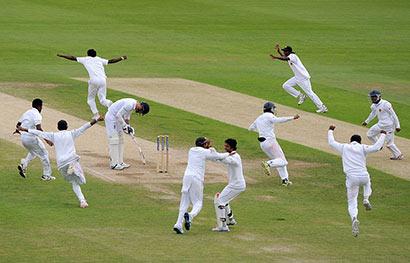 Sri Lanka beat England with just one ball to spare to win the second Test at Headingley by 100 runs and take the two-match series 1-0.

There were more than 20 overs remaining when England No 11 James Anderson came into bat.

But he survived on nought until, off the penultimate delivery of the match, he gloved a well-directed bouncer from Sri Lanka paceman Shaminda Eranga to Rangana Herath at leg gully.

Just as Sri Lanka had staved off defeat by one wicket in the drawn first Test at Lord’s, it seemed England might do likewise in Leeds.

But Sri Lanka No 11 Nuwan Pradeep only had to survive five balls at Lord’s. Anderson had defied Australia’s attack for 53 balls when England clung on for a draw with one wicket standing in the 2009 Ashes Test in Cardiff and so nearly did the same at Headingley.

His 84-minute, 55-ball duck today was the second-longest in Test history after New Zealand’s Geoff Allott made a 101-minute, 77-ball nought against South Africa at Auckland in 1999.

Defeat was tough on England’s Moeen Ali who batted for six-and-a-half hours while making 108 not out — his maiden Test century.

England, set 350 for victory, were bowled out for 249 on the fifth and final day as Sri Lanka won a Test on English soil for only the third time following victories at The Oval in 1998 and Trent Bridge in 2006.

“It means everything to be honest,” said Sri Lanka captain Angelo Mathews named man-of-the-match after recording Test-best figures with both bat (160 in the second innings) and ball (four for 44 in England’s first innings).

“I threw the ball to Eranga saying ‘You’ve got to somehow do it’ and he didn’t let us down,” added the inspirational all-rounder, who also made a hundred at Lord’s.

“Moeen and Jimmy batted brilliantly.” Anderson, in tears at the presentation ceremony, said: “We got quite close and obviously we’re gutted.”

“It’s tough to take, we have pretty much had two bad days in the 10 days of the series and that has cost us,” Cook said.

Cook maintained he was the best person to captain England.

“I’ve never quit on anything,” he said. “I’m incredibly proud to be England captain. If someone decides I’m not the right person to do the job, then fine. Until that moment, I’m desperate to try and help turn English cricket round.”

England resumed on 57 for five, having collapsed in the face of paceman Dhammika Prasad’s stunning burst of four for 15 on Monday.

It was all a far cry from when England were 311 for three after tea on the second day of this Test, thanks to Australia-born opener Sam Robson’s maiden Test century, and even when they reduced Sri Lanka to 277 for seven on Monday — a lead of just 169.

But Mathews responded with a superb hundred and a key eighth-wicket stand of 149 with Herath, who made a valuable 48.

Joe Root was six not out overnight, with Ali yet to come in. The pair kept Sri Lanka at bay for more than two hours Tuesday. But Pradeep made the breakthrough when Root, aiming legside, was caught in the gully.

Prasad, whose final figures of five for 50 were his best in Test cricket, struck again to remove Matt Prior.

Last year the England wicketkeeper took his side to an unlikely Test draw in Auckland by repelling New Zealand for 54 overs.

But he lasted just 37 balls, before a lifting delivery from Prasad flew off his bat handle to Kaushal Silva at short leg.

It was a desperately close call but the former Australia seamer ruled in Sri Lanka’s favour.

After tea, left-arm spinner Herath, who finished with an impressive three for 59 in 42 overs, had both Chris Jordan and Stuart Broad lbw to leave England on the brink of defeat at 228 for nine.

Anderson though refused to yield while an unflustered Ali went to a 259-ball century with his 16th four, a leg-glance off Pradeep.

But the 27-year-old Worcestershire all-rounder, unable to get on strike for the last over, could only watch as Anderson sank to his knees in despair following his dismissal.

1 Response to Sri Lanka in dramatic series win over England