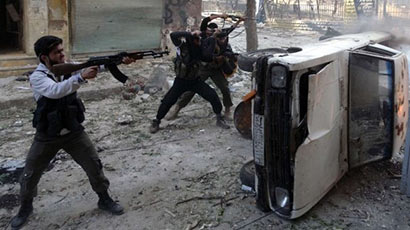 In July of 2013, European Parliament identified the Wahhabi movement as the source of global terrorism and a threat to traditional and diverse Muslim cultures of the whole world. Wahhabi cult was a creation of the British. That should make Muslims happy that the EU Parliament has identified not all Muslims as terrorists but Wahhabis. The Al Qaeda was a creation of the US. Hillary Clinton herself admits http://www.youtube.com/watch?v=Dqn0bm4E9yw but the version that the US is now fighting the Al Qaeda is one story too hard to believe. In short it appears that the ‘Muslim’ fundamentalist organizations are all sourced back to the West and requires Muslims to seriously take cognizance of ground realities sufficient to realize how they are being manipulated through Islam.

Muslim fundamentalism is just one aspect of policies that are engineered to serve a handful. The choice was simple. To destroy the Soviet Union empire was more important than creating Islamic fundamentalists or arming terrorists. Thus, the very nations that claim to be champions of human rights are its worst violators. Behind most of the world’s terror outfits, blamed largely on Muslims is the US, UK and their unholy alliance of elite corporate.

What is unfortunate is that the West has roped in Muslim states to fund a global initiative to use Islam against Muslims themselves. The US State Committee admitted in 2003 that Saudi had spent $87billion to promote Wahhabism globally. Wahhabis deal harshly with moderate Muslims and silences them. Wahhabism has been exported globally with petrodollars funding schools, colleges, mosques, Islamic centres, missionary work of fundamentalist imams and it is on this basis that opposition for madrassas funded by Saudi’s are made in non-Muslim majority nations. The Wahhabi teachings have caused sharp divisions among Muslims as well as contributed to tensions against Muslims by non-Muslims. Source Wahhabi to its origins and we know who are manipulating all these global troubles.

Today, we do not know who is handling whom and how far these terror groups themselves know what they are doing. There is little point spending billions to curb terror when behind the scenes the same countries are creating terror and terrorists. Muslims need to put aside their religious affinity to take stock of these ground realities. These terrorists are using Islam as a camouflage and a perfect means to shield themselves within the global Muslim community.

It has not mattered to the US Government that the wars the US is entering leave its public in trillions of debt – totaling all forms of debt including government, business, mortgage and consumer – Americans are in $54.4trillion debt. http://www.youtube.com/watch?v=91tXobte-Lo

It has not mattered to the US Government that the wars the US is entering leave thousands of soldiers either dead, disabled or hooked to drugs and suffering psychological traumas because the corporate elite that make the decisions to wage wars end up securing the deals in all of the ‘humanitarian’ military interventions now taking place with the tacit approval by puppet UN officials.

The American public is suffering no different to the rest of the nations where these corporate elites have either unleashed terror (using Islamic fundamentalists that they have trained) or through economic sanctions, dictators and implementing regulations through the UN that have nothing to do with the democracy they pretend to preach. The American public is kept docile by Patriotic Acts, National Security Acts and have because of their ignorance given away all their liberties to these corporate and their henchman.

As for the Muslims, they need to wake up and realize that if their religion Islam does not preach violence then no Muslim should take a gun in defense of Islam. The links and origins of Islamic terror to US/UK and Allies shows how far Islam has been manipulated and requires the Muslims themselves to take action. If the majority of Muslims are for peace, for this to be relevant and meaningful they must not allow the fundamentalists to rule them. It is these fanatics who are killing, who are taking over mosques and madrassas and indoctrinating people and youth and silencing the peaceful majority. The silent majority of Muslims should not remain silent. The Russian Communists ruined Russia, Chinese Communists did colossal damage too, Japan too has a history of killing, Tamils were silent for 30 years allowing LTTE to prevail. Peace loving people cannot become irrelevant by choice.

Muslims need to first realize that the brand of Islam causing havoc the world over is handled by the West for their own geopolitical & economic agendas. Americans need to wake up before Americans suffer no different a fate to what the Muslims will find out when the fanatics own them. We need to realize that all of the post-World War 2 conflicts were engineered to serve the pockets of a handful. The peaceful majority of these conflict-ridden countries did not speak up until it was too late.

When US says that it was monitoring Muslim radicalism in Sri Lanka a decade ago, we need to realize that the US was preparing the next wave of trouble in Sri Lanka. All of the new incursions that the people have opposed which the Muslims did not practice earlier (halal labeling, sharia banking, sharia laws, loud speakers, madrassas, Arabian mosques, Arabian schools, animal sacrifice, increasing numbers of hijab wearers) in reality have been encouraged with the indirect intention of creating disharmony and inciting emotions of non-Muslims against Muslims. These are perfect pressure points where Muslims are made to make the demands and non-Muslims question why a minority religion should dictate how the majority live and eat. The Muslims in a dilemma on what to follow and what not find themselves submitting to the will and ending up manipulated. This is basically the hard truth and that which leads to all the tensions.

In summary, we need to realize that America is not controlled by Americans or its politicians. In reality both the American and the American politicians are puppets in the hands of a handful of corporate elite who use the power of America to wage wars/interventions/invasions upon nations initially using American soldiers as cannon fodder and now outsourcing that to its corporate partners in the Middle East to produce the Islamic groups to fight each other and ensure that the elite of US/Allies prevail in all of the countries they will hold reign in. All of the countries the US is supposed to have liberated find themselves in total chaos ruled by the very people the Americans hand over power to. The supposed ‘liberated’ people find themselves jumping from the frying pan to the fire – they have not only lost their country but the country’s resources as well!

The people need to understand only a few facts. A handful of people are ruining the world. They have no love for any country, creed, religion except for money and power to control people. The money in their control has made them psychopaths desiring to watch people suffer, plotting to make people suffer and ensuring that people live in suffering.

The people can reverse the trend. The choice of course is theirs.