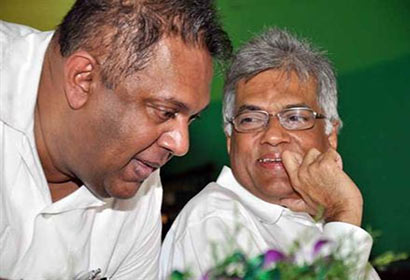 The Sri Lankan military has announced that they have received information that certain politicians are attempting to divulge names of intelligence units and pin blame on them for the Aluthgama debacle in an obvious effort to create distrust and bring further chaos. It smacks memory of Aturugiriya and reminds us of how UNP for cheap publicity ended up exposing the entire intelligence of the army and killing 44 intelligence personnel. Are we to see another betrayal of men who have sacrificed their lives for the nation by some unworthy politicians is what the country must now ask and it should not be too difficult to guess who the culprits may be or the political party they belong to either. While, politicians are welcome to sling mud at each other, wherever and whenever they like making a spectacle of themselves, they should leave people who are committed to serve the nation from being exposed. These intelligence officers who are both serving military personnel as well as people belonging to the minority community have given their lives to serve the nation. The politically motivated Millenium City raid compromised HEROs of our time. We do not need traitors in Parliament to make petty political gains by exposing their names in a bid to create dissent within the intelligence.

Let us not forget what the UNP did in exposing intelligence officers.

Excerpts from the report

None of the UNF heads tendered an apology for helping to bump off 44 officers endangering national security falling prey to rumors. The UNF stands guilty of not only exposing these patriotic and daring officers but subjecting them to humiliation and torture by policy thugs headed by Udugampola. They were treated as common criminals and pleas by even the army chief had been rejected. Does John Amaratunga remember any of these unpardonable acts, we wonder. What was UNF leaders thinking in giving away vital information just to please the LTTE and what did they get in return?

It calls to mind how over 600 police officers were asked to give themselves up to the LTTE and one by one each were massacred by the LTTE. This occurred again under a UNP Government.

With the announcement by the Sri Lankan military we now wonder what other mischief this same party is up to.

Its vote base of course must now arise for no UNP voter would wish to expose the nations intelligence unit again knowing the debacle that happened after Aturugiriya raid. It is unpardonable that politicians would even consider making a similar expose. This is not what the UNP voters expect of their politicians and the voters must make this known.

When the country is facing numerous threats we demand that our politicians enjoying plush lives at the expense of the tax payer do not jeopardize the nation and its citizens once again. We do not wish to subject another set of people’s lives to ruin and reverse the hard won peace gained. We expected much from the politicians after our brave war heroes gave us victory over the LTTE. We do not wish to have that hard won peace reversed by petty good for nothing politicians.

Voters must ensure that support for politicians is given on the basis that they do not betray the nation, its armed forces and the people. The National Security of the Country must Come First.

2 Responses to SRI LANKA NEEDS NO MORE TRAITORS – Has UNP forgotten how it killed 44 intelligence officers?