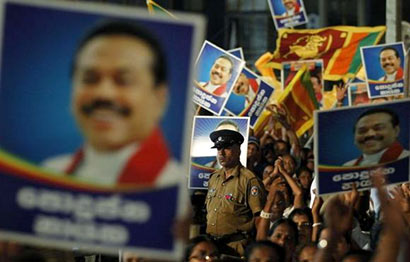 Supporters of Sri Lanka’s ruling party has repeatedly violated election laws in the run-up to Thursday’s presidential vote and has largely got away with it because police have turned a blind eye, a local polling monitor said on Tuesday.

The Centre for Monitoring Election Violence (CMEV) said there had been “unparalleled misuse of state resources and media” by the party of President Mahinda Rajapaksa, whose bid for a third term could be upset by an unexpected challenger from within his own ranks, Maithripala Sirisena.

“There was impunity. No action was taken against the perpetrators or actions were mild,” Paikiasothy Saravanamuttu, a convener of the CMEV, told reporters.

He said police inaction had allowed election-related violence to mount, adding that most of those responsible were local councillors from Rajapaksa’s party.

CMEV, one of three main local monitor groups, said it had documented 420 incidents of violence and intimidation since the poll was announced in November. In one case this week, decapitated dogs’ heads were delivered to the houses of two human rights activists who are known critics of the government.

Police spokesman Ajith Rohana said the level of violence had been much lower than during previous elections and actions had been taken against perpetrators, including two deputy ministers.

Government spokesman Keheliya Rambukwella said he could not comment on the allegations of misuse of state resources unless they were specific. He rejected claims that ruling party supporters were behind the violence.

It also raised concern over the deployment of troops in the former war zone in the north of the island nation, where a 26-year insurgency by Tamil separatists was put down in 2009, which could reduce voter turnout there.

The main parties representing Sri Lanka’s ethnic Tamil and Muslim minorities, who account for a quarter of the 21 million population, have pledged support for Sirisena.

There have been no credible opinion polls, but many political analysts believe Sirisena is within striking distance of unseating Rajapaksa.

“While Rajapaksa is likely to use security forces to suppress turnout in opposition and minority areas … the effort is unlikely to prove large enough to swing the election,” said Eurasia Group’s Sasha Riser-Kositsky in a research note.

Rights group Amnesty International said reports of a potential organised plan to obstruct voters on election day using the military was a “matter of grave concern”.