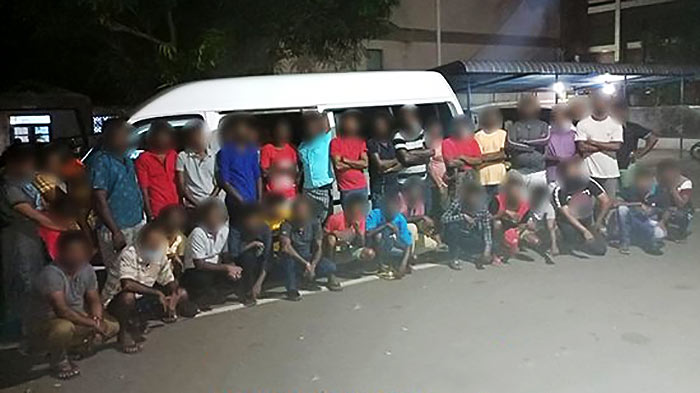 47 people who were ready to go to France illegally via sea were arrested by Sri Lanka Navy and Police in the town area of Wennappuwa last night (July 31).

The coordinated operation was launched by the Western Naval Command and Wennappuwa Police, based on information received by the Sri Lanka Navy.

The group of individuals were nabbed after searching 03 suspicious vans in Wennappuwa on yesterday night. Among the apprehended persons were 37 males and 06 females over 18 years and 04 individuals below 18 years. The 03 vans used for this illegal act were also taken into custody.

The apprehended persons were identified as residents of Jaffna, Vavuniya, Trincomalee, Kalmunai, Batticaloa, Puttalam, Chilaw, Marawila, Mahawewa, Mundalama and Wellawatta. They were handed over to Wennappuwa Police for further investigation.

It is observed that human smugglers organise these kinds of rackets for the purpose of making money quickly. Against such backdrop, the Navy urges the public to refrain from risking their lives by engaging in perilous sea voyages and be victims before the law.