Sri Lanka needs a true human being, not a king – Maithripala 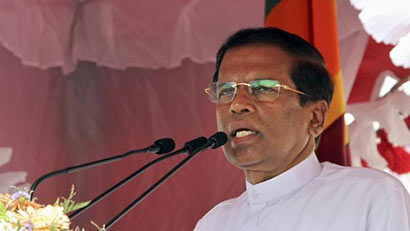 “I invite all political parties in parliament to join the all-party government to create good governance and drive the country towards expected aspirations,” he said, delivering his first address to the nation.

He also pledged that the unlimited powers vested with the Executive Presidency will be transferred to the Parliament, Cabinet and Judiciary.

The President addressed the nation from the Paththirippuwa (the Octagon) of the Sri Dalada Maligawa (Temple of the Sacred Tooth Relic) in Kandy.

Sirisena stated that the first step of his new government would be to eradicate poverty from the country and also pledged to promote religious coexistence and communal harmony in the country by ensuring the freedom and rights of every religion.

He further said that the new government would take every measure to also eradicate corruption, fraud, irregularities and bribery within the country.

He added that: “The country needs a true human being, not a king” and vowed to serve as a true worker to the people.

President Sirisena also reiterated that he will not seek a second term as President in Sri Lanka, saying Friday’s poll was the first and last Presidential Election he would contest.

Home » Sri Lanka needs a true human being, not a king – Maithripala