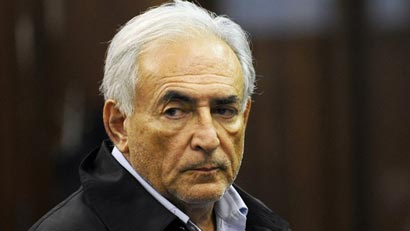 Sri Lanka’s new government Thursday said it was cutting ties with sex scandal plagued ex-IMF chief Dominique Strauss-Kahn after paying him $750,000 for being an advisor to attract foreign investment.

Spokesman Rajitha Senaratne said the cabinet had decided to terminate the services of the 65-year-old economist, who is now on trial in France accused of pimping.

“The Central Bank of Sri Lanka had hired LSK and Partners,” headed by Strauss-Khan, without the proper authority to do so, Senaratne told reporters.

He said $750,000 had been paid to Strauss-Kahn’s LSK and partners, but it was not clear what work he had carried out, or if any more money was owed.

“Our (new) government does not feel it necessary to get his services. We can manage on our own,” Senaratne added.

Strauss-Kahn is accused of being at the centre of a vice ring that hired prostitutes for sex parties in Brussels, Paris and Washington.

The former head of the International Monetary Fund’s career imploded in 2011 when he was paraded handcuffed in front of the world’s cameras after a New York hotel maid accused him of sexual assault.

Those criminal charges were dropped and the case settled in a civil suit, but six months later Strauss-Kahn’s name cropped up in an investigation into a prostitution ring in northern France and Belgium.

The Sri Lankan government has not accused him of any improper conduct.