Sri Lanka on the verge of fourth successive series defeat 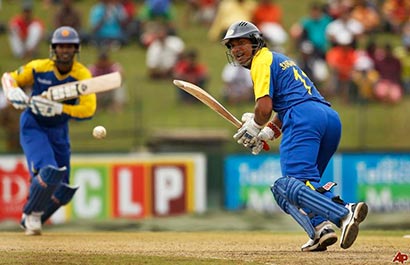 Bloemfontein is the venue where Sri Lanka’s campaign in the ICC Cricket World Cup in 2003 started and captain Sanath Jayasuriya set the tone for the tournament with a swashbuckling hundred and the Sri Lankans will be hoping for a similar performance by their current captain Tillakaratne Dilshan or one of the senior players as they take on South Africa in the third ODI of the five match series here at Springbok Stadium today.

The series is at stake for the tourists having suffered losses in Paarl and East London and if Sri Lanka lose here, it will be their fourth successive series defeat following earlier losses to England, Australia and Pakistan. “We need to try and avoid another series loss. We haven’t had a good series since the World Cup. We know its’ going to be tough. The conditions, playing South Africa and all these are challenges. But we know that we are a good side in any condition and our batting needs to click and if we click at the right time we should do well,” Angelo Mathews, Sri Lanka’s vice-captain said addressing a media briefing yesterday.

Bloemfontein is one of the most beautiful grounds in the world and has some excellent playing and practice facilities. The venue can hold around 20,000 spectators and the grass banks here are a popular attraction prompting supporters to bring along and cook their braai (barbecue) while enjoying the game.

This was also the venue where Jayasuriya announced himself as a future star with his first ever noteworthy onslaught in international cricket in 1994. Aged 24, Sanath smashed a run a ball 140 with nine fours and six sixes against the Kiwis on that occasion opening the innings.

Sri Lanka captain T.M. Dilshan said that the tourists were intending to play two spinners for today’s game, but had to abandon that idea as the arrival of off-spinner Sachithra Senanayake was delayed although Sri Lanka Cricket in a media release on Saturday had stated that the bowler would leave to South Africa immediately. The Island learns that Senanayake was not able to get here on time due to delay in obtaining a visa!

Sri Lanka are expected to play an unchanged side for today’s game.

The tourists suffered a massive 258 run defeat in Paarl, their worst in the history, followed by a five wicket loss in East London to concede a 2-0 advantage to South Africa making the next three games must win ones.

South African skipper A.B. de Villiers leading the side for the first time is on the verge of a series win against the finalists of the World Cup, but was aware of the dangers if the opposition’s three senior most players, two of whom have had an ordinary tour so far, fired. “We know Sanga, Dilshan and Mahela are three big factors in their team. They are all world class players and we are expecting them to fire very soon. To be very honest we didn’t go deep into that. We are looking at only our combination and our basics and that’s the most important thing. We believe that if we do that we should win the game. That’s the most important thing.”

For South Africa Hashim Amla has been released on paternity leave, while Jacques Kallis has been rested. Medium paceman Rory Kleinveldt too has been ruled out with injury and his place has been taken by Vernon Philander, who was the Man of the Series in the Tests. Alviro Petersen and Colin Ingram are the replacements and the two are expected form the South African top order along with Graeme Smith.