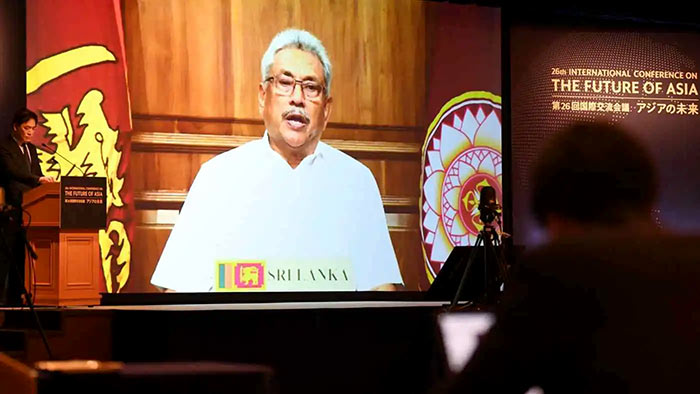 “We are aware of the world power rivalry and regional power dynamics, but our foreign policy is to remain neutral,” Rajapaksa said while addressing Nikkei’s Future of Asia conference, which is being held in Tokyo and online through Friday.

“We will not jeopardize Indian security,” he stressed. At the same time, ties with China will continue, Rajapaksa added.

Colombo’s relationship with Beijing began to deepen toward the end of Sri Lanka’s nearly 30-year civil war, and then expanded in the postwar infrastructure building spree. While India provided military training and non-offensive military assets, China, Pakistan and Russia supplied weapons on a commercial basis, he noted.

“China provided concessionary loans for many infrastructure projects [during the post-conflict development],” he said.

Rajapaksa used the occasion to defend one of China’s flagship infrastructure projects in southern Sri Lanka — the $1.5 billion Hambantota Port, which was built with Chinese loans and sits on the edge of one of the world’s busiest shipping lanes.

“The Hambantota Port is not a debt trap,” Rajapaksa insisted, dismissing a widely held view that Sri Lanka had coughed up the port to a Chinese company on a 99-year lease because of a failure to pay the project’s debts. It is a “commercially viable project” and is “transforming Sri Lanka’s overall port infrastructure.”

This followed praise for another Chinese-funded “Port City” project off the coast of Colombo, the commercial capital. Sri Lanka aims to position this $1.4 billion Chinese investment on an artificial island as an international financial and business special economic zone.

This “Gateway to South Asia” on 269 hectares of reclaimed land “represents an exciting new opportunity for international business,” he said. “Investors from all over the world will benefit greatly from … the Port City’s unique geostrategic position at the heart of one of the most rapidly advancing regions in the world.”

Faith in these Chinese mega-projects to boost the country’s fortunes comes as Sri Lanka, like other Asian neighbors, is feeling the economic pain of the coronavirus pandemic. “Our economy contracted by 3.6% during 2020,” Rajapaksa said of the downturn — the worst economic performance since records started being kept.

He made a pointed reference to the drain in foreign exchange from the once-lucrative tourism sector. “Although most sectors rebounded to their pre-2019 levels by the end of 2020, the tourism sector could not,” he said of an industry that saw its earnings shrink to $692 million for 2020 from $4.3 billion in 2018, an all-time high.