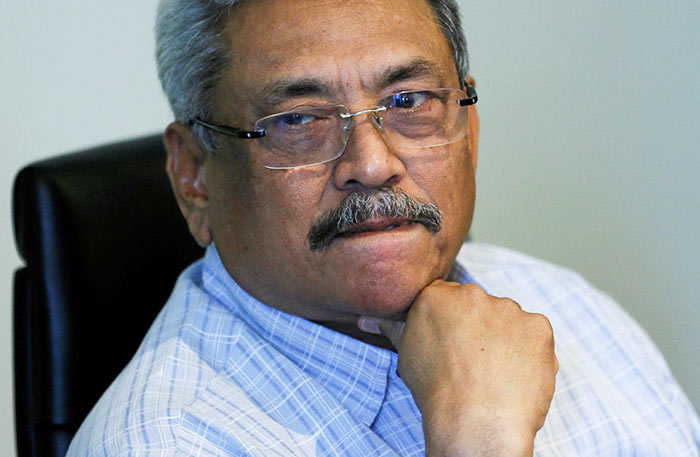 The Court of Appeal set a hearing for Wednesday on a petition filed by two civil activists who claim that Gotabaya has not lawfully obtained his Sri Lankan citizenship after living in the U.S for many years.

Civil rights activists Chandragupta Thenuwara and Gamini Viyangoda had filed the petition, seeking an order declaring Gotabaya a non-citizen as he prepares to file a nomination for the Nov. 16 presidential election.

Gotabaya returned from the U.S in 2005 to help with his brother Mahinda Rajapaksa’s presidential campaign. He was appointed defense secretary after his brother’s victory.

If Gotabaya loses, he could be disqualified from the election because Sri Lankan law doesn’t permit dual citizens or non-citizens to hold office.

Gotabaya was a dual citizen of Sri Lanka and the United States. His spokesmen have repeatedly said that he has renounced his U.S. citizenship.

Mahinda Rajapaksa is a former strongman who ruled Sri Lanka from 2005 to 2015. Gotabaya, serving as his brother’s defense chief during that period, played a key role in bringing a bloody end to Sri Lanka’s 25-year civil war in 2009.

However, he was a feared defense official and has been accused of condoning rape, torture and shadowy disappearances of critics. But he is considered a hero among most of the ethnic majority Sinhalese for his role in ending the war.

Gotabaya is facing two lawsuits in the U.S., one in the killing of a prominent newspaper editor and another involving the torture of a youth under his watch. He also faces a corruption case in Sri Lanka in which he has been accused of misappropriating $191,000 in state funds for the construction of a memorial for his parents. He has denied the allegations.

Gotabaya, 70, is considered a front-runner in the presidential election, with his popularity increasing following the Easter Sunday attacks that killed more than 260 people in Sri Lanka.

With the government facing mounting criticism for failing to prevent the attacks, Gotabaya’s hardened reputation and vow to ensure national security has made him a strong candidate.

The April 21 attacks on three churches and three hotels were carried out by two local Muslim groups inspired by the Islamic State group.

Both Thenuwara and Viyangoda have been actively campaigning for democracy, good governance and establishing the rule of law in Sri Lanka.