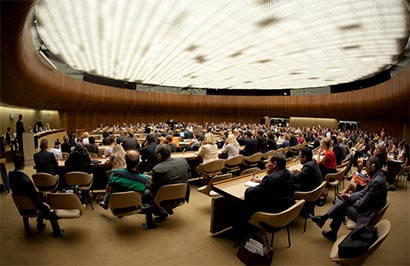 The Sri Lanka delegation to the 21st Session of the Human Rights Council in Geneva is continuing to engage with the relevant Interactive Dialogues with Special Procedures Mandate Holders and Working Groups.

Participating in the Session on ‘Human Rights Situation in Palestine and other occupied Arab territories’, Sri Lanka expressed its deep concern about the hardships faced by the Palestinian people. Noting that it had long advocated the recognition of the inalienable rights of the Palestinian people, Sri Lanka said it remains steadfast in its unequivocal support to the people and the Government of Palestine for their just struggle to achieve the right of statehood, coexisting peacefully alongside Israel. Sri Lanka urged the Government of Israel to lift the blockade placed on Gaza, within the framework of Security Council Resolution 1860, which has a devastating impact on the lives of the ordinary people of Palestine, especially the young. Sri Lanka also voiced its belief that the State of Palestine would soon be able to assume its rightful place among the community of states at the United Nations.

Participating in the General Debate on ‘Racism, racial discrimination, xenophobia and related forms of intolerance, follow-up and implementation of the Durban Declaration and Programme of Action’ Sri Lanka renewed its commitment to the core principles of equality and non-discrimination embodied in the Durban Declaration and Programme of Action. Sri Lanka noted that as a country which has emerged from a 30-year long terrorist conflict, it is acutely aware of the manner in which racial and other ideologies could be manipulated by extremist elements seeking to foster fascist ,separatist agendas and engender hatred and intolerance, which pose a threat to the sovereignty and territorial integrity of States.

Intervening in the interactive Dialogue in ‘the Report of the Chairperson- Rapporteur of the UN Open-ended Intergovernmental Working Group on the Right to Development’, Sri Lanka, while commending the significant progress made during the 13th Session, in the consideration, revision and refinement of the Right to Development criteria, noted that it is equally important to recognize that greater political consensus must be sought in order to remove the obstacles that stand in the way of this intrinsic right. With the world facing multiple crises, today more than ever, the implementation of this right, is of critical importance. In this context, Sri Lanka noted that it has taken steps to implement the multidimensional framework of the Right to Development, placing emphasis, not merely on development, but also on equity and sustainability.

Participating in the Discussion on integrating the human rights of women throughout the United Nations System which focused on economic, social and cultural rights and the empowerment of women’, Sri Lanka highlighted the significant improvement of the status of women that has taken place as a result of the Government policy which is focused on integrating gender, empowering women and addressing their needs at all levels of society. Sri Lanka also noted the steps the Government has taken to integrate a gender perspective in the country’s post-conflict reconciliation where women are recognized as equal partners and valuable contributors in the development process such as livelihood development and self-employment programmes which are being implemented to support the lives of the victims of the terrorist conflict, especially widows and single mothers.