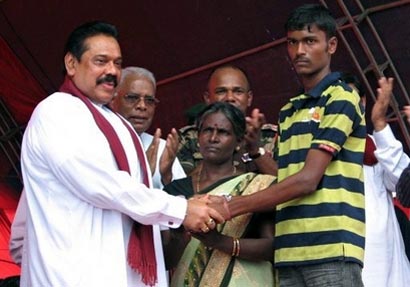 President Mahinda Rajapaksa joined the hands of 15 men, women and children with relatives at a special ceremony at the Manik Farm camp in northern Sri Lanka where more than 100,000 war refugees are housed.

“The terrorists led you astray and the suffering you endured as a result is beyond words,” Rajapaksa, a Sinhalese, told the gathering in the Tamil language. “We will give you employment for your skills and you must start lives anew.”

Government forces routed the Liberation Tigers of Tamil Eelam guerrillas in May last year, ending the country’s more than a quarter century long civil war in which an estimated 80,000 to 100,000 people died.

According to the government, more than 12,000 rebels or suspected rebels, including children, were sent to rehabilitation camps. The number of civilians living in the squalid camps peaked at some 300,000.

Rights groups called the mass detention an illegal form of collective punishment for the minority ethnic Tamils, who have long complained of discrimination by majority Sinhalese-dominated governments.

The government has maintained that Tamils must be screened for rebel ties and detainees’ villages de-mined before the camps can be closed.

Saundaralingam Arulmani, 38, a father of three, said he had been with the Tigers for 15 years working at their printing press and on their housing programs before leaving in 2007 to look after his young family.

He said he gave himself up to Sri Lankan soldiers after they captured the area. For the first five months he was not allowed to meet his family and they could only exchange letters.

At the rehabilitation centre he was taught Sinhalese language and meditation. Recreational activities included sports, singing, and television, Arulmani said.

“I feel I have been in the dark not knowing what’s happening in the outside world,” he said of his life in rural rebel-held areas. “Now I must become a good citizen, and I am determined to give my children a good education and make sure that they grow up as good people.”