Sri Lanka Runs Out Of Fuel As Dollar Crisis Worsens 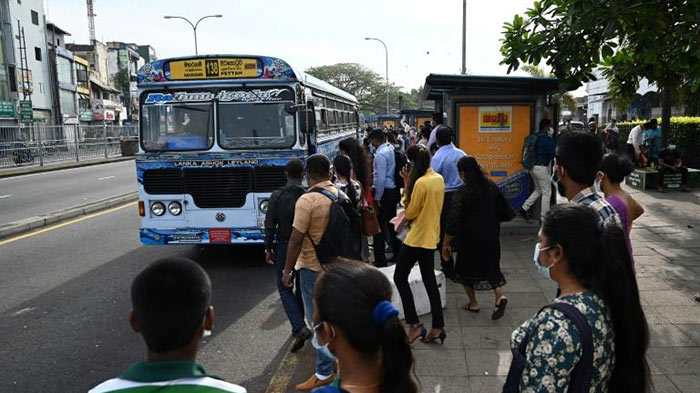 Sri Lanka’s public transport was crippled Wednesday as buses ran out of diesel, officials said as the country’s foreign exchange crisis worsened with no dollars to import fuel.

The Private Bus Owners’ Association said they were able to operate only about a quarter of their fleet of 20,000 vehicles, while drivers reported queuing for seven hours to top up fuel.

“I could not run the bus for two days because there was no diesel,” said 51-year-old bus driver Sarath.

“I have been in the diesel queue for seven-and-a-half hours.”

Many commuters were seen using their own motorcycles and small cars Wednesday after bus operators warned of drastically scaled back schedules.

One of Sri Lanka’s biggest fuel suppliers, Lanka IOC, put up prices by as much as 12 percent on Saturday while the state-owned Ceylon Petroleum Corporation (CPC) said it too asked the government to allow it to raise prices.

CPC sources said Wednesday they had supplies only for four more days.

“We have also reduced the issue of diesel to gas stations and asked pumps to try and ration supplies,” one said.

Taxi driver Thushara, 36, said he was in a queue for six hours to get petrol for his three-wheeler.

“Why can’t (President) Gotabaya (Rajapaksa) consider the suffering of the people?” Thushara told AFP as he reached the front of the line.

“Can’t he understand the suffering? Just come out and see. Why are you allowing people to suffer like this?”

The transport shutdown came as seven-and-a-half hour electricity blackouts also went into effect, the longest scheduled power rationing in over a quarter of a century.

The Public Utilities Commission (PUCSL) said the cuts were brought on due to the shortage of foreign exchange to import fuel for electricity generators.

Hydro electricity reservoirs were also running low due to the current dry season.

Under a new directive, all state institutions were also ordered Tuesday to switch off their air conditioners in the afternoon to save energy.

Sri Lanka’s tourism sector, a key foreign-exchange earner, collapsed in the wake of the Covid-19 pandemic, and the government imposed a broad import ban in March 2020 to save foreign currency.

The country is now in the grip of an economic crisis, with widespread shortages, including food, medicines, automotive parts and cement, and supermarkets forced to ration staple foods including rice, sugar and milk powder.

Official data showed the country’s foreign currency reserves at a low of $2.07 billion at the end of January, down 25 percent compared to the previous month and $7.5 billion in November 2019 when President Rajapaksa took over.

Energy minister Udaya Gammanpila has described the oil shortage as the “worst economic crisis since independence” from Britain in 1948.

The shortages pushed food inflation to 25 percent in January with overall inflation at 16.8 percent.