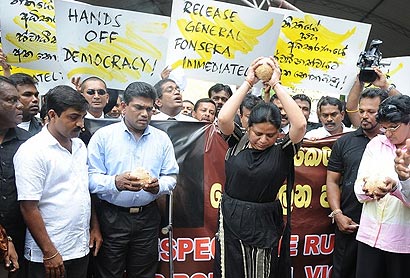 Opposition parties in Sri Lanka are promising a huge demonstration on Tuesday to mark one year since the detention of the losing presidential candidate Sarath Fonseka.

He was held after losing the election to the incumbent, Mahinda Rajapaksa.

In September he was moved to prison after a military court found him guilty of corruption.

With jail comes the loss of the parliamentary seat he won last April and he still faces more court cases.

Thirteen months ago it seemed that Mahinda Rajapaksa might have met his electoral match.

Sarath Fonseka had led the army to victory over the Tamil Tigers but fell out with his former friend over who should take the glory for that victory.

The fact that both men were ardent Sinhalese nationalists only made the election fight more bitter.

But as the results showed Mr Rajapaksa winning, it became clear just how much Gen Fonseka would suffer after his electoral challenge.

His campaign hotel was surrounded by troops and 12 days later, kicking and screaming, he was dragged into detention by military police and an officer junior to himself.

Why, then, was Sarath Fonseka arrested?

His detractors – and every government figure swiftly became one – say he was plotting a coup, and that two court martial verdicts against him show he was guilty of dabbling in politics while in uniform and corruptly securing arms deals.

The defence secretary has even threatened to hang him, implying that he was guilty of murdering a newspaper editor while army chief.

But Sarath Fonseka’s supporters say he was detained for daring to challenge Mr Rajapaksa at the polls.

The opposition says his fate points to the government’s intolerance of dissent.

Some civil society campaigners are in two minds about the whole Fonseka affair.

They never liked Sarath Fonseka when he was army chief and accused him of perpetrating a number of human rights violations.

Now, however, they allege that a lack of rule of law in Sri Lanka has made him, too, a victim.