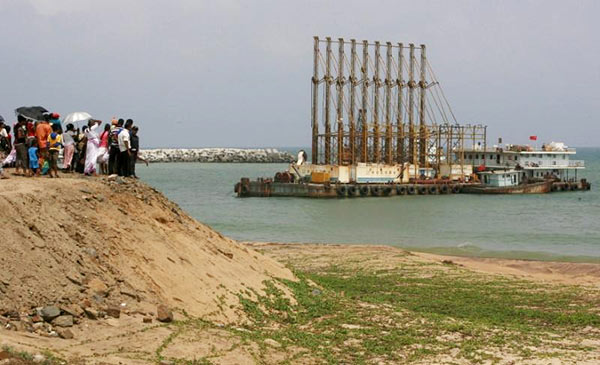 Sri Lanka signed a long delayed $1.1 billion deal on Saturday to lease its southern Hambantota port to China ignoring an appeal by opposition parties to debate the pact in parliament.

The deal was signed between the two state firms — Sri LankaPorts Authority (SLPA) and China Merchants Port Holdings(0144.HK) to handle the commercial operations of the Chinese-built port on a 99-year lease.

Chinese firm will hold 70 stake in a joint venture with SLPA to run the port, part of a plan to convert loans worth $6 billion that Sri Lanka owes China into equity.

“We thank China for arranging this investor to save us from the debt trap,” Port Minister Mahinda Samaraasinghe told the gathering in Colombo port where the deal was signed.

He said the Chinese firm will invest additional $600 million to make Hambantota port operational while $1.12 billion from the deal will be used for debt repayment.

Hu Jianhua, the executive vice president of the ChinaMerchants Port said the port facilities belong to the citizens of Sri Lanka but will be a key part of China’s massive One Belt One Road initiative to build trade and transport links across Asia and beyond.

“With these maritime infra-structure investments, and other diverse investments such as the proposed international maritime center, Sri Lanka will be well positioned to play a strategic role in the one-belt-one-road initiative of China,” Hu said.

Located near the main shipping route from Asia to Europe and likely to play a key role in China’s “Belt and Road” initiative, the Hambantota port has been mired in controversy since the Chinese firm signed an agreement to take an 80 percent stake in the port built for $1.5 billion.

The pact signed last year sparked widespread public anger as Chinese control of the port, which included a plan for a 99-yearlease of 15,000 acres (23 sq miles) to develop an industrial zone next door, raised fears the port could be used for Chinese naval vessels.

Sri Lankan government has revised the deal to set up two companies to split the operations of the port and allay concerns, in India mainly but also in Japan and the United States, that it won’t be used for military purposes.

A group of opposition members led by former leader Mahinda Rajapaksa and Marxist Janatha Vimukthi Peremuna asked the government not to sign the agreement until it is in parliament.

The Hambantota port deal was scheduled to be debated on Friday, but the parliament was adjourned to Aug. 4 after the opposition disrupted proceedings over a trade union action.

“It is government’s responsibility to give a parliamentary debate as they abruptly hoodwinked the debate yesterday,” Dinesh Gunawardena, an opposition leader told Reuters.

“We have requested the president to give us a time to discuss the concerns.”

Government and diplomatic sources told Reuters that the United States, India and Japan have raised concerns over possible military activities by China in Hambantota port.