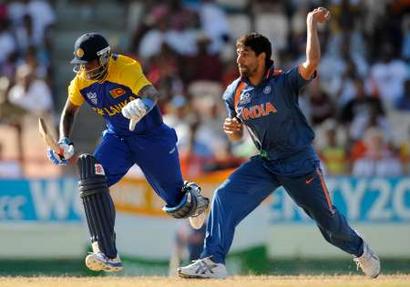 India were humiliatingly knocked out of the Twenty20 World Cup on Tuesday when a last-ball six from Sri Lanka’s Chamara Kapugedera condemned them to their third straight defeat in the Super Eight stage.

Sri Lanka, who have two victories in Group F, won by five wickets and go through to play England in Thursday’s semi-final.

Seconds after Kapugedera, needing three off the last ball, drove Nehra mightily over cover for six, the Sri Lankan players raced on to the field in joyous celebration of the win which kept alive their hopes of reaching their second successive final.

For India, who enjoy huge financial and political influence in the game because of the success of their domestic Twenty20 league, the IPL, the result will be hard to swallow.

India made a challenging total of 163 with Suresh Raina hitting a sparkling 63 but they paid the price for slowing down significantly in the second half of their innings having been 90 for one after 10 overs.

“They bowled really well… they made it really difficult for us,” said Indian captain M.S. Dhoni.

“Overall, batting is out strength and we should have done better. We didn’t perform to our potential. The last 4-5 overs that they bowled really restricted us. We need to improve in quite a few areas.”

Although they lost key openers Mahela Jayawardene and Sanath Jayasuriya cheaply and stood at six for two, Tillakaratne Dilshan (33) steadied things with some intelligent batting.

Skipper Kumar Sangakkara (46) and Angelo Mathews (46) then provided the backbone of the reply before Kapugedera (37 not out) took Sri Lanka over the line in spectacular fashion.

Kapugedera hit Vinay Kumar for two sixes at the end of the penultimate over to significantly reduce the target to 13 off the last over.

When Mathews hit the first ball of the final over, from Nehra, for six, victory was in sight but he was run out in the fifth ball of the over with still three needed.

By that stage the mathematics of run rate meant that India were already out but it was more than salt in the wound to lose in that fashion.

“At the end of the day, if you are outplayed and the opposition plays really well there is nothing much you can really do,” said Dhoni.

Sangakkara was in markedly different mood.

“We have always talked about how good our young players are, and they showed that today. Whatever happens after this, we can rest assured we have done the best we can”

(Editing by Pritha Sarkar; To query or comment on this story email sportsfeedback@thomsonreuters.com)