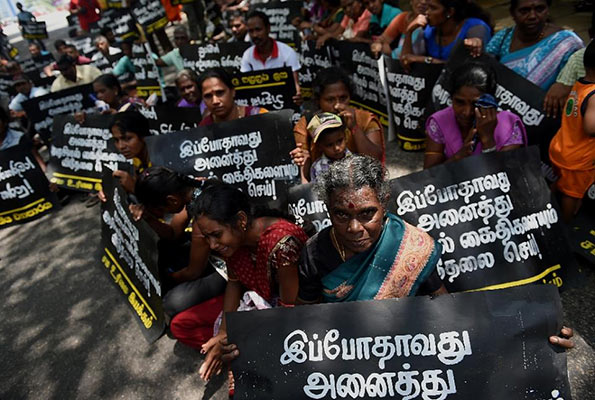 Sri Lanka Saturday announced it had significantly scaled back a list of foreign-based “terrorists” as part of reconciliation efforts with its largest ethnic minority, the Tamils.

Eight Tamil advocacy groups were de-listed according to a government order published in an official gazette, but the separatist Liberation Tigers of Tamil Eelam (LTTE) whose military leadership was crushed in 2009 remained on the banned list.

On a list of proscribed organisations and people created by the the previous administration in March last year, the number of “terrorist” groups was reduced to eight from 16 and the number of individuals cut back to 155 from 424.

The government did not immediately comment on the move, but it had promised eight months ago to carry out a review as part of reconciliation efforts.

“This was done to build up the hysteria about the LTTE regrouping.”

“Reviewing this list of individuals and entities is an important exercise at this juncture when the government of President (Maithripala) Sirisena is seriously committed to expedite the reconciliation process,” the minister added.

The former regime of strongman Mahinda Rajapakse, who ruled for a decade until he was defeated in January elections, had said the ban on the groups and individuals was to prevent them from funding Tamil rebels to regroup in Sri Lanka.

However, there had been no terror attacks blamed on the rebels since their crushing defeat in May 2009.

The terror designation applied to several organisations in Australia, Britain, Canada and the United States.

Rights groups had said most of the organisations as well as the individuals designated as terrorists by the previous regime had merely been vocal proponents of Tamil rights.

The Rajapakse administration faces allegations that troops under its command killed at least 40,000 Tamil civilians in the final months of fighting in 2009.