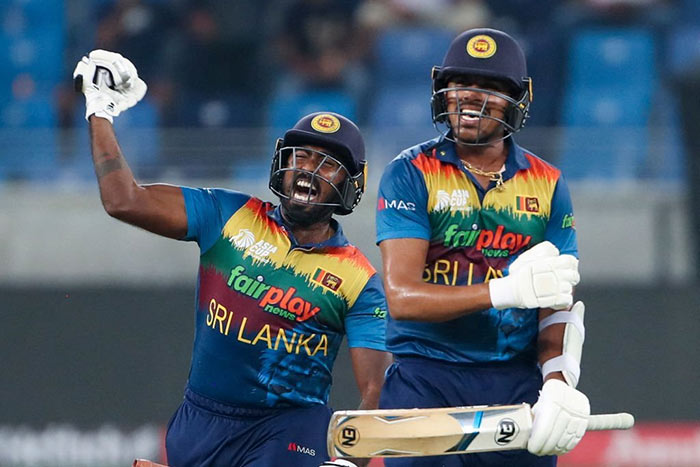 Sri Lanka pulled off a sensational two-wicket victory over Bangladesh and advanced to the Super 4 stage of Asia Cup on Thursday (September 01).

In a must-win last Group B game, Sri Lanka’s tailenders held their nerves to reach 184-8 for their second-highest successful run-chase in a T20 international.

Needing 13 off the last seven balls, No. 9 batter and debutant fast bowler Asitha Fernando (10 not out) smacked two crucial boundaries to end Bangladesh’s run in the tournament even after they posted a decent 183-7.

“In the middle period I thought it was tough. When Kusal and I were at the crease, I felt it was achievable,” Sri Lanka skipper Dasun Shanaka said. “When Chamika (Karunaratne) was run out, I thought the game was done, but Asitha Fernando’s two shots were great.”

Afghanistan has already topped Group B with two convincing wins against both Bangladesh and Sri Lanka.

Bangladesh had only themselves to blame for their ill-disciplined bowling, conceding eight wide balls and four no-balls to ruin the early good work of their batters.

“Death bowling is something we are looking to improve and that has cost us the game,” Bangladesh’s skipper Shakib Al Hasan said. “The last two overs they were eight down, needed to get 17-18 runs and they got with a lot of balls to spare.”

Fast bowler Ebadot Hossain (3-51), one of the three changes Bangladesh made from its last defeat against Afghanistan, did the early damage through his sharp short pitched deliveries, but conceded 17 runs in the penultimate over that included a boundary off a no-ball.

Opening batter Kusal Mendis top-scored with 60 off 37 balls, but got a number of reprieves before he had scored his half century. Wicketkeeper Mushfiqur Rahim couldn’t hold on to Mendis’ healthy edge in the second over before the opener got caught behind only to see the offspinner Mahedi Hasan had overstepped.

Bangladesh didn’t go for the television referral when Mendis clearly gloved a catch to Musfiqur down the leg side and also survived a run-out before reaching his half century.

Despite all these let offs, Bangladesh came back strongly when Taskin Ahmed took two splendid catches at third man that included a crucial diving catch of Mendis in the 14th over.

Shanaka smashed 45 off 33 balls and contributed a 54-run stand with Mendi before getting caught at long on in the 18th over off Hasan. But Sri Lanka tail hung in well to snatch a nail-biting victory with four balls to spare when Hasan bowled a no-ball and Fernando ran for two runs.

Earlier, Bangladesh middle and lower order did well by smacking 60 runs off the last five overs.

Mehidy Hasan Miraz, who opened the innings, provided a rollicking start with a knock of 38 off 26 balls. But it was Afif Hossain’s brilliant 39 off 22 deliveries was well supported by Mahmudullah’s 27 and Mosaddek Hossain’s unbeaten 24 off 9 balls which provided Bangladesh a perfect finish.

Sri Lanka’s key leg-spinner Wanindu Hasaranga, who got rid of Mehidy in his first over soon after the batting powerplay, took 2-41 and fast bowler Chamika Karunaratne picked up 2-32.

Pakistan will take on Hong Kong in the last Group A game on Friday. India has already topped the group after beating both Pakistan and Hong Kong.