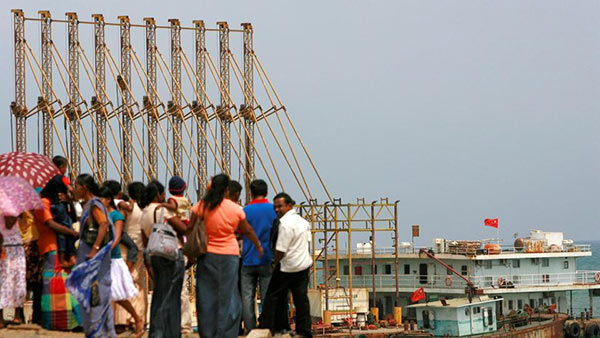 Sri Lanka has been a major transshipment point for Indian cargo. Trying to become a base for Chinese manufacturing and re-exporting as well could be seen as a geopolitical move by India. Sri Lanka stands to lose Indian shipping money by encouraging a large Chinese presence.

India has reaffirmed its commitment to the development of Trincomalee port in Sri Lanka during Sri Lankan Prime Minister Ranil Wickremesinghe’s recent State visit. These plans pale in comparison to the billion dollar investment that China has made to the port of Hambantota. But that may be for the better. The last Sri Lankan government of Mahinda Rajapaksa placed his country into a Beijing debt trap, borrowing $8 billion at absurdly high rates of interest, to build the port. Colombo today struggles to pay this off, largely by being forced to borrow money from more user-friendly sources.

Sri Lankans across the political spectrum envision a future in which they become a logistical hub for the Indian Ocean. This has been encouraged by Sri Lanka’s lucrative role as the major transshipment point for Indian cargo. About a quarter of India’s containerised ocean cargo goes through Sri Lanka. The last Sri Lankan government had an additional vision of becoming a base for Chinese manufacturing and re-exporting as well.

However, Sri Lanka’s “grand port strategy” has a number of contradictions. The most important is the growing conflict between trying to be the logistics gateway of India as well as an Indian Ocean hub for China. New Delhi inevitably sees Chinese owned and managed critical infrastructure on its periphery in geopolitical and not commercial terms. A concern brought to the fore by Mr Rajapaksa’s ill-considered decision to allow Chinese nuclear submarines to dock in Sri Lanka. Serving as the southern gateway to India would mean integrating Sri Lanka into the manufacturing supply chains of southern India. A large Chinese presence along such chains would be seen as a potential threat to the Indian economy, something that Sri Lankans, taken up by the money to made from port construction and the fees they believe will follow, fail to understand. Similarly, New Delhi has put plans for a second bilateral free trade agreement on hold because of Colombo’s attempts to sign one with Beijing.

Colombo’s attempts to play a China card against India will and have spurred New Delhi in an obvious direction – build ports at home to reduce Sri Lanka’s importance as a transshipment point. The planned Enayam port in Tamil Nadu is designed to do exactly that. By the time it is fully completed in 2030, the Enayam port complex should be able to handle 8 million TEUs of containeried cargo. In comparison, Sri Lanka handled about 1.2 million TEUs of Indian transshipment cargo in 2014-15. Serendipity is a selling point for tourists, but it is a synonym for naivete in the realm of maritime geopolitics.