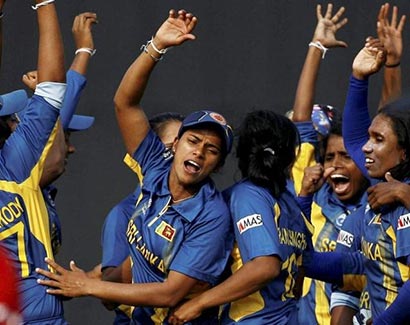 Sri Lanka, a qualifier in the ICC Women’s World Cup 2013, pulled off a last-ball heist against defending champion England to emerge victor by one wicket at the Brabourne stadium here on Friday.

Needing nine from the final over, Eshani Lokusooriya (56, 41b) got under the ball from Georgia Elwiss and swung it over mid-wicket for a six, her third of the match. She got run out off the fourth ball, but had done enough to fire up Dilani Manodara’s ambitions and the latter took the attack to England with a last-ball six.

The action-packed 50th over resulted in Lanka stealing 14 runs. Facing a huge task of chasing down 239 against an experienced bowling unit, the Lankans’ bold response was 244 for nine in 50 overs, their highest World Cup chase.

The entire Lankan squad ran onto to the field. Dilani, bat in hand and delirium on her face, greeted teammates by kneeling down on the turf near the pitch as they crowded around.

“I felt no pressure after our top order had done their job. Today was my day and I wanted to seize the moment,” said Eshani, named ‘player of the match’.

The defending champion had earlier recovered from a top-order collapse at 93 for four to compile a healthy 238 and then worked on snuffing out a Lankan fightback with disciplined bowling backed by acrobatic catches. England was stunned by Eshani’s powerplay though the burly number six picked her spot in the field and cleared the ropes easily with five fours and three sixes.

The heat proved too much for Elwiss, dropped a looping top-edge by Dilani off the third ball of the 50th over.

“We were in the game till the last over and were confident of keeping them in check, with our bowling. I do not want to take the credit away from Sri Lanka for a marvellous show,” reacted England captain Charlotte Edwards.

The Lankan chase began on a sparkling note, with an enterprising Chamari opening with a cautious Yasoda. The left-handed Chamari blasted forceful shots each time the bowlers gave her width to free arms and her partner rotated the strike with placements. These quiet moments at the start was like the calm before the storm.

Falling for the bait

Chamari (62, 72b, 7×4, 1×6) and Yasoda (46, 90b) fell for the bait, attempting forcing shots against medium-pacers Brindle and Brunt as the Lanka chase temporarily went off the boil.

Chamari’s drive ended in mid-wicket’s hands. Yasoda did not connect cleanly when surprised with a short ball and top-edged to Colvin in the same region.

Prasadini got bowled when trying a swat across the line. Lankan captain Shashikala, facing a run-a-ball situation, kept the momentum going with sharp running between wickets.

Lydia Greenway’s tumbling catch at square leg turned the tide, with the skipper back in the dressing room after a quickfire 34 off 45 balls. Lanka needed the big-hitters to fire. Eshani stepped out and swung the match around.