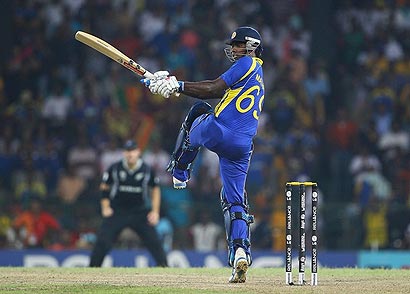 Sri Lanka overcame a serious bout of the jitters to book their place in Saturday’s World Cup final in Mumbai, as New Zealand bowed out in the last four for the sixth time in ten campaigns, though with their pride fully intact after another fabulous never-say-die performance in Colombo.

In a strange amalgam of the one-sided thrashing that Sri Lanka handed out to England in their quarter-final on Saturday, and New Zealand’s last-eight fightback against South Africa in Dhaka, the favourites duly progressed, and by a seemingly comfortable five-wicket margin. However, the closing stages were fraught in the extreme as a raucous home crowd was forced to postpone a party that had been in full swing for more than three-quarters of the contest.

Defending a mediocre total of 217 after a spirited batting effort had unravelled in a clatter of late wickets, New Zealand’s lust for a scrap kicked in with a vengeance just when it seemed the match was finally out of their reach. At 160 for 1 in the 33rd over, with Tillakaratne Dilshan and Kumar Sangakkara entrenched in a game-breaking partnership of 120, what little attention had been on this, the less glamorous of the two semi-finals, had already begun to drift towards Wednesday’s epic match-up in Mohali.

But then Dilshan, cruising on 73 from 93 deliveries and seemingly destined for his second hundred in consecutive matches, slapped loosely at Tim Southee and picked out Jesse Ryder at point, whose second catch of the innings was a far less breathtaking affair than his earlier one-handed pluck off Sri Lanka’s pace-setter, Upul Tharanga.

Three balls later, the new man Mahela Jayawardene was beaten in flight by a beautiful dipping delivery from Daniel Vettori and nailed plumb lbw for 1, whereupon Sangakkara’s habitually cool head deserted him, as he attempted to steer the lively Andy McKay over the keeper for four, but ended up dollying a simple chance to Scott Styris at third man.

Sri Lanka had lost three wickets for eight runs in 22 deliveries, and just as had been the case in the throttling of South Africa, New Zealand’s bowlers ramped up the aggro while maintaining supremely disciplined lines and lengths. On the same worn wicket that had been used for the England quarter-final, runs suddenly became excruciatingly hard to come by as Sri Lanka’s untested middle order was fully exposed to the limelight.

Chamara Silva and Thilan Samaraweera scraped together nine runs in six overs as the asking rate climbed to close to five, and it took a message from the dressing room, delivered with a drink from Dilhara Fernando, to persuade them out of their defensive mindset. Silva responded with two fours in consecutive deliveries as Ryder’s seam-up was brought into the attack, but three balls later he tried to get aggressive against the extra pace of Southee and chopped onto his own stumps for 13.

Samaraweera, however, had the experience to see his team home. A short ball from Ryder was fetched over midwicket for four, before a wild throw from Oram gifted him another four as the ball sailed over the keeper’s head. Another error lopped five more precious runs off the total as a McKay wide slipped through the keeper’s grasp, and though McKay responded with a beauty to Angelo Mathews that was sent to be reviewed for caught-behind, the lack of Hot Spot meant there was no evidence available to reverse the on-field decision. And with a smoking six off Southee in the next over, the game was finally relieved of its tension.

Such a nerve-jangling finale could not have seemed further from the agenda while Sri Lanka’s innings was in full flow. From the moment Tharanga launched his third ball, from Nathan McCullum, straight down the ground for six, Sri Lanka were always ahead of the asking-rate. His departure for 30 from 31 balls did change the tempo of the Sri Lankan innings, but neither Dilshan nor Sangakkara had any reason to rush towards a modest victory target.

Sangakkara had an early let-off when he edged Oram at a catchable height through the vacant slip cordon, while Dilshan – who had been so combative against England – took 28 deliveries to score the second boundary of his innings, and his 50th of the World Cup to date. But he went on to pass 400 runs for the tournament, en route to overtaking Jonathan Trott as the leading run-scorer, and as Sangakkara finally began to nail his trademark cover-drives, New Zealand looked to have run out of ideas.

In hindsight, the Kiwis will look back on the closing stages of their own innings with regret, for a late collapse of 5 for 13, including 4 for 4 in 12 balls, undermined much of the good work they had put into the early part of their innings. The bed-rock was provided by Scott Styris, a centurion against Sri Lanka in the 2007 World Cup, who ground out a responsible 57 from 76 balls. But when he was extracted lbw by the final delivery that Muttiah Muralitharan will ever bowl on home soil, Sri Lanka responded euphorically to scythe through the tail and leave seven precious deliveries unused.

Whether a 240 target would have made any difference will remain a matter for conjecture. Though they fared better than any other team in the tournament so far in taking 41 runs off Sri Lanka’s bowlers in the batting Powerplay, they were ultimately undone by the depth and variety of their attack, with Lasith Malinga’s yorkers scalping three key wickets at critical moments.

Too many of New Zealand’s batsmen made starts without going on. Martin Guptill flicked Malinga’s fifth delivery through midwicket in a 65-ball 39, only for Malinga to york him superbly when he returned for his second spell, while Brendon McCullum slog-swept Rangana Herath for six, only to be bowled for 13 playing the exact same stroke. Taylor, whose ferocious hitting could have been so valuable at the death, launched a long-hop straight to deep midwicket just when he looked ready to build on his 36 from 55 balls.