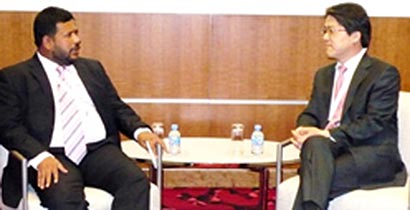 Rishad Bathiudeen, Minister of Industry and Commerce of Sri Lanka met Sihyung Lee, Deputy Minister for Trade of Republic of Korea on 22 April on the sidelines of the 13th Ministerial Meeting of UNCTAD General Assembly Session at the Qatari National Convention Center, Doha.

Minister Sihyung Lee was apprising Rishad Bathiudeen, Minister of Industry and Commerce of Sri Lanka during a Sri Lanka-South Korea bilateral session held on the sidelines of the 13th Ministerial Meeting of UNCTAD General Assembly Session at the Qatari National Convention Center, Doha.

Apprising Minister Sihyung Lee, Minister Bithiudeen stated: “Sri Lanka is keen in studying the different avenues available for promotion of Sri Lankan products in the Korean market with special emphasis on apparel and tea, either in the context of the Asia-Pacific Trade Agreement (APTA) or some other mechanism.

As a preliminary step in this process, I would like to explore the possibility of leading a business delegation on the occasion of Sri Lanka’s participation in the EXPO 2012 Yoesu, Korea, scheduled to be held in Yeosu over a period of three months, commencing from 12th May – 12th August, 2012 this year.”

Sri Lanka and South Korea are members of the Asia Pacific Trade Agreement (APTA) formerly known as Bangkok Agreement / which was signed in 1975 with the initiative of the ESCAP for promoting intra-regional trade through exchange of mutually agreed tariff concessions by member countries. Sri Lankan apparel products have been making inroads to the South Korean market under the APTA. However, the value of apparel exports has remained rather modest, averaging around US$ 6.5 Mn.

To promote bilateral trade further, Sri Lanka Export Development Board and the Korean Importers Association (KOIMA) signed an MOU on the side-lines of the Sri Lanka Expo 2012 in March this year.