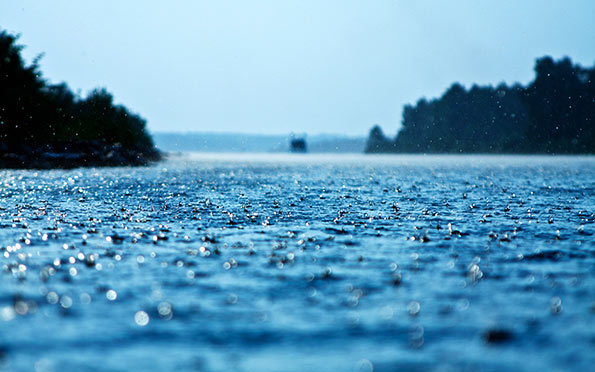 Sri Lanka plans to store and use a billion cubic meters of rainwater per year, which would otherwise drain into the sea, in an ambitious effort to boost irrigation and power production.

The new water management system is being built in the country’s dry zone, which covers its northern and eastern areas.

Home to at least a third of Sri Lanka’s population of 20 million, the mainly agricultural zone has been hit hard by climate shifts over the past decade, and is suffering severe water shortages.

Experts say the project could harness enough water to fill two of the country’s largest reservoirs, Victoria and Randenigala.

The $675 million project, funded by the government and donors, begins this month and is due to be completed by December 2024.

One of the island nation’s largest water-related infrastructure projects in recent years, it envisages the construction of two new reservoirs and 260 km of new and upgraded canals linking existing reservoirs.

The aim is to help the dry zone better manage its water supply for power generation and farming.

“Rain patterns have been changing and the dry zone is getting less water now,” said S Shanmugasivanathan, a senior official with the Department of Irrigation. “We need to optimize water usage.”

Mean annual rainfall across Sri Lanka is 2,000 mm, of which the dry zone gets half or less. Most of the farming done there relies on irrigation, using small water tanks that are filled from the region’s larger reservoirs.

“With rain patterns now coming in short and intense bursts, we are faced with frequent incidents of floods interspersed with drought,” Shanmugasivanathan said.

“During floods we have no option but to release the water, because there is no infrastructure in place to retain it,” he added.

The new project would put to use some of the rain and floodwater that is now wasted.

The plan to build new water retention infrastructure in the dry zone has been on the drawing board since the 1970s in the form of the Mahaweli Development Programme, which covered the country’s central hills and some of the north.

The idea was to use the waters of the Mahaweli River, the longest in the country, to increase power generation capacity by about 260 MW and provide irrigation water to an additional 325,000 acres of land.

But parts of the project were stalled by the civil war that ravaged Tamil-dominated northern and eastern Sri Lanka for a quarter of a century until 2009.

The new water management project is based on a modified and upgraded version of the original Mahaweli scheme, according to government officials and the Asian Development Bank (ADB), which is providing $453 million in funding.

The ADB estimates that 70 percent of the dry zone’s population depend on agriculture. The impact of weather extremes on farming in the region means average income there is 10 percent lower than in the rest of the country, it calculates.

The hope is that the new project will help pull local people out of poverty, ADB officials say.

“The dry zone communities have historically remained among the poorest on the island and changing climate patterns will further impact monsoon rains and possibly worsen droughts,” said Lance Gore, a water resources specialist with the ADB in Manila.

“By providing more water, the project will enhance the earning capacity of people dependent on agriculture,” he said.

It also aims to supply safe drinking water to 350,000 people.

Farmers in the dry zone are mostly in favor of the project, because even in years of above-average rainfall they have endured water shortages as reservoirs empty too quickly.

“There were floods earlier in the year, but by the time I went to do the planting toward the end of the year there was no water left. The small reservoirs in this region can’t hold that much water when it rains, and run dry very fast when drought sets in,” he explained.

Experts agree the new project could help ease the impact of drought in the dry zone, but say it is only part of the solution.

To end water scarcity in the region for good, farmers must learn to adapt their water usage and employ new techniques for conserving the precious resource, they say.

“We cannot build an unlimited number of reservoirs or canals – there is a limit to the amount of water we can provide,” said irrigation official Shanmugasivanathan. “What is important right now is to pay attention to water management.”