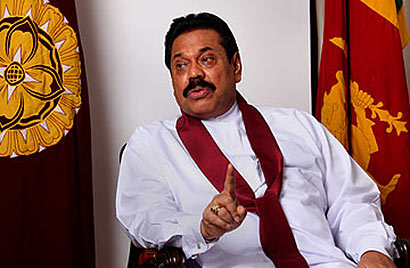 Colombo – Sri Lanka’s president on Friday acknowledged his discomfort at the prospect of being censured by the UN’s top rights body, as he accused Washington of treating Colombo like Muhammad Ali’s “punching bag”.

The United States is the author of a resolution due to be voted on by the United Nations’ Human Rights Council in Geneva on March 28, which accuses Sri Lanka of failing to investigate allegations of war crimes at the end of its conflict against Tamil separatists in 2009.

But in an address to foreign correspondents on Friday, President Mahinda Rajapakse insisted he had done all he could to ensure reconciliation after crushing the Tamil Tiger rebels and ending the 37-year conflict.

“The whole resolution, we are uncomfortable with,” Rajapakse said at his Temple Trees residence. “There should not be a resolution at all.”

Rajapakse said he was at a loss to understand why the US was moving a third resolution in as many years, accusing it of bullying the Indian Ocean island.

“This is like Cassius Clay using a school boy as a punching bag,” Rajapakse said in reference to the former heavyweight boxing champion Muhammad Ali.

Rajapakse’s unease at the likely upbraiding in Geneva was echoed by his Foreign Minister Gamini Lakshman Peiris who told the gathering: “We feel acutely uncomfortable by the pressure brought on us by a powerful country.”

Rights groups say up to 40,000 ethnic Tamil civilians were killed by government forces in the bloody finale to the war. Rajapakske has denied his troops killed any civilians.

Although the exact text of the resolution is still not known, the US has said it will file a motion that buttresses Pillay’s recommendations made after a controversial visit to Sri Lanka in August when she declared that the Rajapakse administration was becoming increasingly authoritarian.

The government said this week that Pillay’s recommendations reflected “bias and is tantamount to an unwarranted interference in the internal affairs of a sovereign state”.

Rajapakse said he was committed to ensuring investigations into any allegations of wrongdoing by his security forces and challenged his accusers to provide evidence.

“I advocated investigations into disappearances in 1989 and 90 (during an uprising by Sinhalese Marxist rebels). Even today, I believe in it (human rights),” Rajapakse said.

Sri Lanka has previously said it needs more time to address issues of accountability and reconciliation after ending the Tamil conflict, which according to UN estimates claimed at least 100,000 lives. (AFP)