South Africa urged to shun Sri Lanka, back US resolution 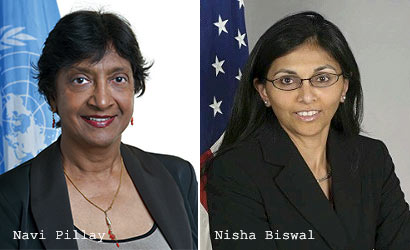 An influential South African organization working closely with pro-LTTE groups are stepping up pressure on the African National Congress (ANC) to abandon its role in the post-war national reconciliation process in Sri Lanka and vote for the US-sponsored resolution against Sri Lanka.

Sri Lanka Solidarity Group (SGPJ) comprising the South African Tamil Federation, the Tamil Coordinating Committee, the World Saiva Council and several other stakeholders established in 2007 has urged South African government to quit the Sri Lankan reconciliation project. The grouping is widely believed to be close to the UK based Global Tamil Forum (GTF).

The SGPJ recently urged South Africa to join the US-UK led grouping spearheading the move against Sri Lanka at the Geneva-based United Nations Human Rights Council (UNHRC) session scheduled to begin today (March 3). The US is scheduled to move its third resolution against Sri Lana since the conclusion of the conflict in May 2009.

South Africa is among the seven countries from the African continent on the 47-member UNHRC. The vote on the US resolution is scheduled to take place later this month.

An authoritative GoSL official told The Island that the Diaspora as well as the SGPJ probably feared that the appointment of Vice President of the ANC Cyril Ramphosa as South Africa’s Special Envoy to spearhead the Sri Lankan project could undermine UNHRC chief Navi Pillay’s efforts to haul Sri Lanka up before an international war crimes tribunal.

The official said that the GTF had distanced itself from the South African initiative though it was originally involved in the effort. Well informed sources said that the GTF appeared to have second thoughts on the project especially after the Tamilnet at the behest of the LTTE rump attacked the South African initiative. The Tamilnet went to the extent of alleging that some corrupt sections of the ANC were involved in the operation.

The SGPJ has strongly urged South African government to shun the Sri Lankan delegation. The grouping reminded the pretoria government that it was set up by the late Minister Roy Padayachie to enhance the Diaspora support for the Tamils’ struggle in Sri Lanka.

A three-page statement issued by Solomon Pillay on behalf of SGPJ, the group reiterated the GTF claims that 23 countries, including India would vote for the US resolution in March.

Although international media said that US Assistant Secretary of State forSouth and Central Asian Affairs Nisha Biswal would visit New Delhi early this week to discuss bilateral relations in the wake of Khobragade episode involving an Indian diplomat whose humiliating treatment at the hands of US authorities angered India, GoSL sources said that the US resolution, too, would definitely figure. Biswal is scheduled to visit Bangalore and New Delhi from March 4-6. In Bangalore, she will meet with government and business leaders to discuss joint efforts to foster innovation, increase high-tech and engineering engagement, and strengthen US-India economic ties.

From Bangalore, she will travel to New Delhi, where she will meet with senior Indian officials to discuss the full range of bilateral and regional issues, “including shared defense, security, and economic engagement across the Indo-Pacific corridor,” according to a State Department announcement. On March 6, she will deliver remarks on the US-India economic relationship at the American Center in New Delhi.

The State Department asserted that during her visit, Assistant Secretary Biswal “will seek to further broaden and deepen the US-India relationship, which President Obama has called one of the defining partnerships of the 21st century.”