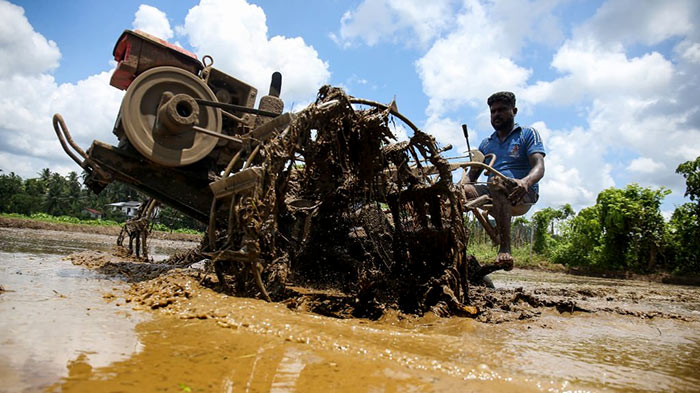 A farmer works in a paddy field in the Ranala area near Colombo, Sri Lanka on April 30, 2022. (Photo by Pradeep Dambarage / NurPhoto via Getty Images)

Sri Lanka is calling on farmers to grow more rice as it faces its worst economic crisis in more than 70 years.

The country’s agriculture minister made the appeal as he said the country’s “food situation is becoming worse”.

It comes as severe shortages of essentials, including food, helped to push inflation, the rate at which prices rise, to a new record high.

Also on Tuesday, the government raised taxes to help pay for critical purchases, including fuel and food.

The island nation of 22 million people has been hit hard by the pandemic, rising energy prices, and populist tax cuts.

A chronic shortage of foreign currency and soaring inflation has also led to a shortage of medicines, fuel and other essentials.

“We request all farmers to step into their fields in the next five to ten days and cultivate paddy [rice],” he added.

Sri Lankan officials have been looking for ways to boost food production, as Prime Minister Ranil Wickremesinghe has warned of severe food shortages by August.

The country is also applying for assistance from a South Asian food bank, which has supplied rice and other goods to countries in need, the Financial Times newspaper reported.

Food commissioner J Krishnamoorthy told the newspaper in an interview that her department had “just started the process” of asking the South Asian Association for Regional Cooperation (SAARC) for “food bank assistance”.

Ms Krishnamoorthy added that Sri Lanka was seeking around 100,000 metric tonnes of food in the form of donations or subsidised sales.

The SAARC is a grouping of eight countries in South Asia. It includes Sri Lanka and India, which is emerging as one of Sri Lanka’s biggest providers of aid.

Sri Lanka’s Food Commissioners Department and the SAARC did not immediately respond to BBC requests for comment.

On Tuesday, the Sri Lankan government announced an immediate increase to value added tax (VAT) from 8% to 12%. The move is expected to boost government revenue by 65bn Sri Lankan rupees ($179.9m; £142.7m).

It also said corporate tax would rise in October from 24% to 30%.

Earlier this year, then-Sri Lankan financial minister Ali Sabry told the BBC that he saw a need to raise VAT.

He added that the nation needed $4bn (£3.2bn) over the next eight months to pay for imports of daily essentials.

Also on Tuesday, official figures showed that Sri Lanka’s rate of inflation rose to a record 39.1% in May, from a year ago. It had reached a previous high of 29.8% in April.

Inflation reduces the purchasing power of money since more money is now needed to buy the same items.

High rates of inflation mean that unless income increases at the same rate, people are worse off. This may cause them to spend less as they make fewer purchases from businesses.

Last month, Sri Lanka defaulted on its debt for the first time in history, when grace period to come up with $78m of unpaid debt interest payments expired.

Defaults happen when governments are unable to meet some or all of their debt payments to creditors.

It can damage a country’s reputation with investors, making it harder for it to borrow the money it needs on international markets, which can further harm confidence in its currency and economy.