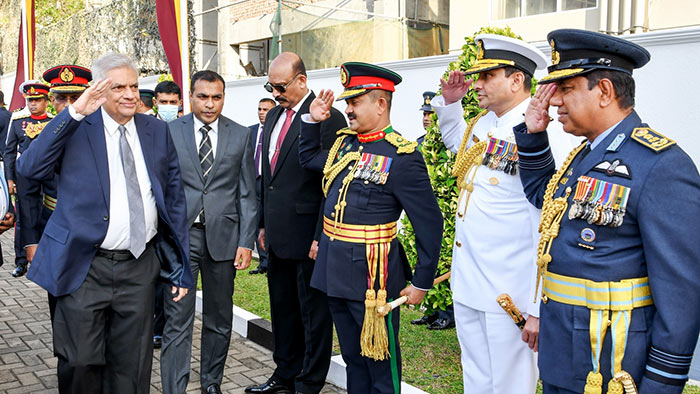 President Ranil Wickremesinghe said that the Indian Ocean region should be opened to all to ensure freedom of navigation for commercial viability, President Media Division said.

Sri Lanka will not participate in military alliances and do not want the problems of the Pacific coming into the Indian Ocean.

In this scenario, he urged the countries in the Indian Ocean region to come together to look at how best to maintain the stability of the region.

Addressing the first ever graduation ceremony of the National Defence College in Colombo yesterday, President Ranil Wickremesinghe emphasised, “That is important for commerce to carry on. We have to remember that the bulk of the petroleum supply and energy supply to the world goes through the Indian Ocean. A large amount of shipping goes through the Indian Ocean. We don’t want this to be an area of conflict and an area of war.”

He noted that Sri Lanka does not want to see big power rivalry in the Indian Ocean, as such rivalry could get reflected everywhere.

He said that Sri Lanka is open to the navies of all countries and there is no discrimination.

“If the navies want to come, we have no problem. They helped in the anti-piracy operations. But we don’t want a level of rivalry which will affect the security and the peace of our area. Whatever it be that we will not join any big power or take sides, we will stay out of it. And that’s why we want to ensure that the big powers and the rivalry don’t need to certainly lead to conflict in the Indian Ocean. That’s one thing we can’t afford.”

President Wickremesinghe also noted that the geopolitics of the Indian Ocean has made Sri Lanka the ‘punching bag’ for Hambantota.

He pointed out that there are around 17 ports that are operated by the Chinese in the Indian Ocean and all the ports are commercial ports. He stressed that Hambantota is also a commercial port and not a military port.

The President pointed out that if there is security significance, it is in the port of Darwin in Australia where the Chinese ports are operating side by side with the area with the Australian and the US forces used for training.

“We don’t have that. We don’t allow anyone to come and train here, but we do have our southern command of the navy. We have a divisional headquarters of the army and we have a detachment of the Air Force.  But none of them are involved. They only ensure that this is a commercial port and no less,” he said, adding that as it is a commercial port, it shows Sri Lanka’s strategic importance that many people sort of come to conclusions which are unwarranted. The President also expressed hope that the next agreement Sri Lanka has with China, will not cause such speculation, and it is only about debt reduction for Sri Lanka.

There will be no movement out of it. That’s why we work with India on the Colombo conclave, on the trilateral security arrangements and many other fields, especially outside the military field of piracy, of human trafficking, of drugs. All those are useful ways in which we cooperate with India and the other island states. Then we also value our friendship with Maldives, those small islands, and we know how important the Maldives is.”

He also said that now that the terrorism war is over, peace needs to be established in the country and expects to reach a final settlement with the Tamils and the Northern population of the country within the next few months. In this regard, the President said that he is currently in discussion with the Tamil parliamentarians in order to achieve that goal.

Meanwhile, the President also said that Sri Lanka should not allow any other country to use it to attack third parties. He also said that a proper plan needs to be set to determine the roles of Sri Lanka’s Army, Navy and Air Force in the future battlefield.