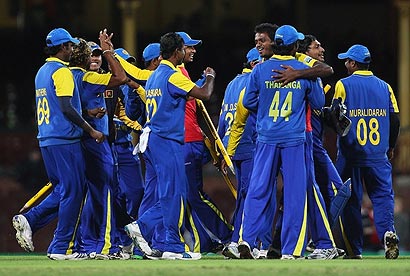 Sri Lanka have beat Australia by 29 runs in the second of three one-day internationals to claim their first series victory on Australian soil.

Australia, who start the Ashes series against England at the end of the month, never looked like reaching their initial victory target of 244 in 39 overs or the 240 in 38 overs they were handed under the Duckworth-Lewis method after rain stopped play for a third time on Friday.

Upul Tharanga, the Sri Lankan opener, contributed an unbeaten 86 to the team’s 213 for three, which they achieved in 41.1 overs as showers interrupted the action for a total of nearly three hours.

“It’s disappointing but we have to get back to playing the brand of cricket we know we’re capable of and get that winning feeling around our dressing room again,” Ricky Ponting, the Australia captain, said.

“Because it’s a lot easier when you have that feeling and we haven’t had that for a while.”

The attendance of 11,495 was the lowest crowd for a one-day international at the Sydney cricket ground for 27 years and most were supporting Sri Lanka.

The Sri Lankan top order put in a solid afternoon’s work to set up the win after relying on the tailenders to produce Wednesday’s remarkable victory in the first match in Melbourne.

“It’s very difficult to beat Australia in Australia so it’s a great achievement for the guys,” Kumar Sangakkara, the Sri Lanka skipper, said.

Watson was the best of the Australian bowlers, accounting for Kumar Sangakkara, who was caught on the boundary by Clint McKay for 45, and Mahela Jayawardene, who was adjudged lbw for five.

Tillakaratne Dilshan put on 98 for the first wicket with Tharanga before being trapped in front by recalled spinner Nathan Hauritz for 47.

The third and final match of the series will take place on Sunday, November 7, in Brisbane, also the venue for Australia’s first Ashes test against England starting on November 25.