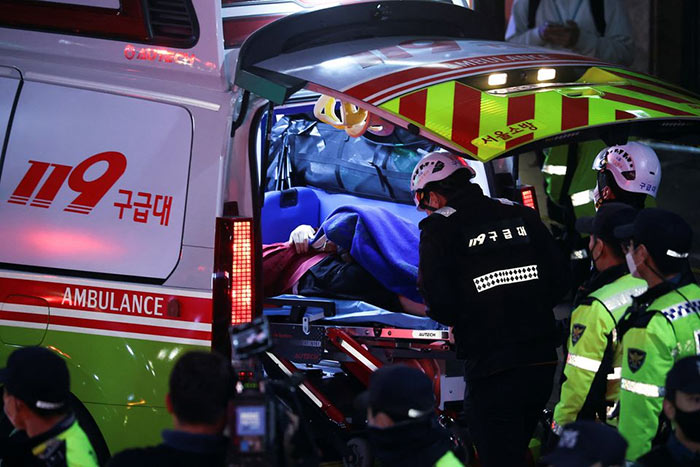 A person receives medical help at the scene where dozens of people were injured in a stampede during a Halloween festival in Seoul, South Korea, October 29, 2022. (Reuters / Kim Hong-ji)

A 27-year-old Sri Lankan man is among those who died in a crush as huge Halloween crowds surged into a narrow street in South Korea’s capital, Seoul yesterday (October 29), according to the Minister of Foreign Affairs, Ali Sabri.

Further, he is a resident of the Kandy area, the Foreign Minister said.

The Sri Lankan mission in Seoul is reportedly in touch with the police and the hospital authorities in Seoul for further details.

At least 151 people had died and more than 82 were injured in the crowd crush in Itaewon, Yongsan-gu, central Seoul in South Korea, according to fire authorities at 10:30 AM on Sunday.

The fire department began to receive reports of patients having difficulty breathing at 10:22 PM on Saturday.

Meanwhile, Sri Lankan President Ranil Wickremesinghe has extended his deepest condolences to the Government and people of the Republic of Korea, especially the families of the deceased.

The president has further wished the injured a speedy recovery, the President’s Media Division (PMD) reported.

Meanwhile, foreign media reported that 19 foreign nationals were among the dead.

The victims were from Iran, Norway, China and Uzbekistan.