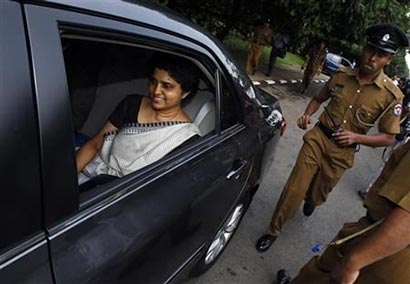 COLOMBO (Reuters) – Sri Lanka’s judges on Monday demanded an impartial inquiry into charges against the chief justice that have created a standoff between the judiciary and President Mahinda Rajapaksa’s government.

The government and the supreme court have been on a collision course since the president’s ruling party filed an impeachment motion against Shirani Bandaranayake, Sri Lanka’s first female head of the Supreme Court, on November 6.

The government complained that she had been overstepping her authority but Bandaranayake’s supporters complained of political interference.

Parliament Speaker Chamal Rajapaksa, the elder brother of the president, has appointed an 11-member select committee, of which seven are from the ruling party, to investigate the impeachment charges.

More than 300 judges meeting in the capital Colombo issued a statement rejecting the panel, saying: “The impeachment against the Chief Justice should be impartial and transparent.”

“Conducting an inquiry by the parties who brought the impeachment allegations is a blatant violation of the natural justice. We reiterate that nowhere in the world those who make allegations will hear their own case,” the statement added.

On Thursday, the parliament speaker rejected a Supreme Court summons challenging the legality of the impeachment move and the composition of the select committee. The Supreme Court rescheduled the hearing to December 13 and 14.

The judges also said they were concerned about what they described as defamatory media statements being made about the chief justice and the judiciary.

“We urge that all defamatory media statements against the Chief Justice and the judiciary should be stopped. We request to consider the grave damage that could be caused to the rule of law in the country due to such statements.”

The United States, the United Nations and the Commonwealth have raised concern over the impeachment move and have called on the government to ensure the independence of the judiciary.

Bandaranayake recently came under criticism from government supporters for ruling against a bid by the central government to take control of an 80 billion rupees ($614.20 million)development budget, saying it had to be approved by nine provincial councils.

The ruling irked the government and its backers, some of whom accused the judiciary of overstepping its authority.