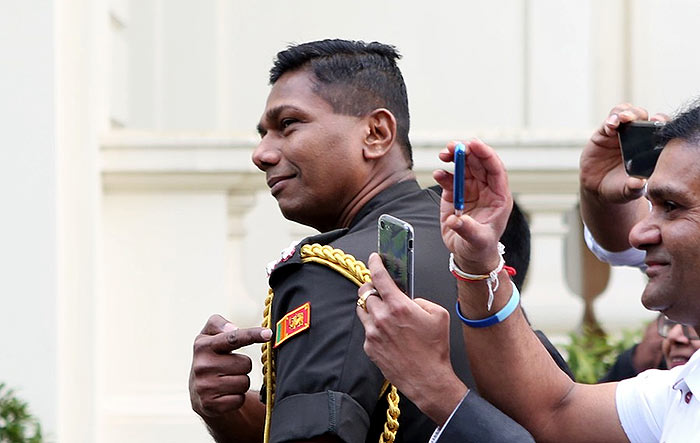 Sri Lanka’s Ministry of Foreign Affairs says the Minister Counsellor (Defence) attached to the Sri Lanka High Commission in London has been suspended with immediate effect and that inquiries will be initiated into the alleged incident involving him.

A video had appeared on social media depicting Brigadier Priyanka Fernando making certain gestures aimed at members from the Tamil community who were engaging in a protest outside the Sri Lankan High Commission in London on Sunday (4), as Sri Lanka marked the 70th anniversary of independence.

“Authorities in Sri Lanka have taken serious note of videos being circulated on social and web-based media of an alleged incident involving the Minister Counsellor (Defence) attached to the Sri Lanka High Commission in London behaving in an offensive manner,” the ministry said.

In this connection, instructions have been sent to Sri Lanka’s High Commissioner in London on Tuesday (6), to suspend the Minister Counsellor (Defence) from work, with immediate effect.

“Authorities in Sri Lanka including the Sri Lanka Army will initiate inquiries on the incident immediately,” the statement said.

Two British Labour Party MPs had written to the UK’s Foreign Secretary calling for the withdrawal of the diplomatic papers and expulsion of Sri Lanka’s Defence Attaché in London, Brigadier Priyanka Fernando, over his “attempt to intimidate” a group of protesting Tamils.

Joan Ryan, the Labour MP for Enfield North and a Vice Chair of All Party Parliamentary Group for Tamils, and Siobhain McDonagh, Labour MP for Mitcham and Morden and Senior Vice Chair of APPG for Tamils, sent a joint letter to Britain’s Secretary of State for Foreign and Commonwealth Affairs, Boris Johnson expressing serious concerns regarding the conduct of Brigadier Fernando.

The letter states that members from the Tamil community congregated peacefully outside the Sri Lankan High Commission in London, to protest the alleged “on-going persecution of Tamils”.

“The Defence Attaché was filmed standing outside the High Commission, opposite the protestors, repeatedly running a finger across his throat – signalling the slitting of one’s neck – in an obvious attempt to intimidate the Tamil people who were present.”

“This is inappropriate, unacceptable and threatening behaviour, from someone who is serving in an official capacity as a guest of this country,” the letter said.

The Labour MPs urged the British Foreign Secretary to make immediate representations to Sri Lanka’s High Commissioner about this matter and also requested that he withdraw Brigadier Priyanka Fernando’s diplomatic papers and expel him.