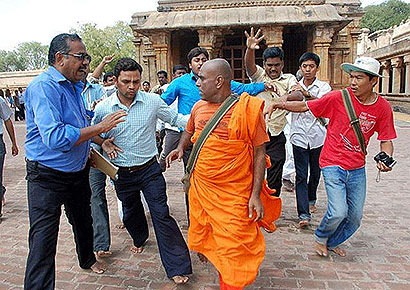 A Sri Lankan Buddhist monk, Pathberiye Gnanaloka Thero, was assaulted by members of Tamil outfits at the Big Temple in Thanjavur, in Tiruchi, India on Saturday.

He was part of a team of students of the Institute of Archaeology of the Archaeological Survey of India (ASI), New Delhi, on a study tour.

Later in the day, vans transporting the students to the Tiruchi airport from Thanjavur were pelted with stones resulting in damage to windshields. However, the students escaped unhurt.

In Thanjavur, the students and staff, 19 in total, were going around the Sri Brihadeeswarar Temple when a group owing allegiance to the Naam Tamizhar Katchi and the Thamizh Desiya Podhuvudamai Katchi attacked Ven. Gnanaloka Thero, who stood out in the group in his saffron robe.

The students were taken to the ASI office near the temple, but the assailants surrounded the office and demanded that the monk be sent out. The incident sent shock waves among devotees and archakas who were witness to the attack.

Gnanaloka Thero was asked to change his clothes and sent to Tiruchi along with other students with police escort in vans. As the vehicles entered Tiruchi, two cabs transporting the students were targeted near Ariyamangalam and G Corner, where members of the Marumalarchi Dravida Munnetra Kazhagam and Naam Tamizhar Katchi attacked the vehicles with sticks and stones, police said. The front windshield of one of the vans and the rear one in the other were damaged. However, the students were escorted safely to the airport.

City Commissioner of Police Shailesh Kumar Yadav met the students upon their arrival at the airport. The monk was put on a Chennai-bound flight later in the evening, while the others were accommodated at the airport temporarily.

The students hailed from different countries, including Sri Lanka, China and Thailand and from north India. All of them are studying Postgraduate Diploma in Archaeology in New Delhi. Their proposed visit to Darasuram and Gangaikondacholapuram temples were cancelled following the incident.

Gnanaloka Thero has been staying in New Delhi for the last one-and-half years pursuing the diploma course. The 46-year-old monk, who hails from Colombo, told The Hindu on the phone from the Tiruchi airport that he came to India in 2011 and enrolled himself for the ASI course.

Eleven persons, including A. Nalladurai, State coordinator of the Naam Thamizhar Katchi, and Pazha Rajendran of the Thamizh Desiya Podhuvudamai Katchi, were arrested in Thanjavur, while 10 persons, including MDMK rural district secretary, Tiruchi, were held in Tiruchi in connection with the stone-throwing incident. (The Hindu)