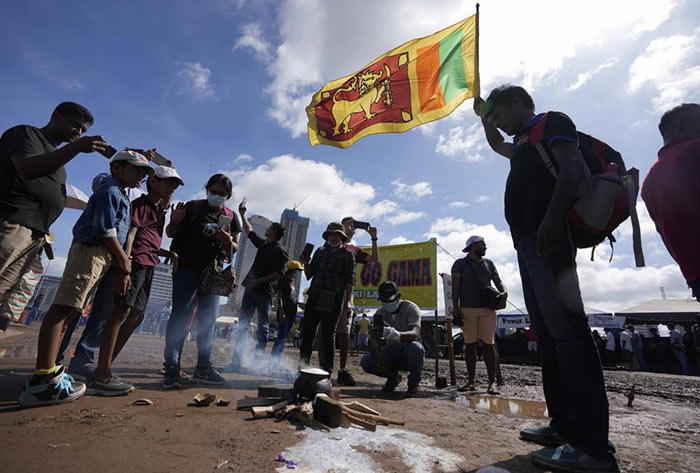 Sri Lankans boil a pot of milk to welcome the dawn of Sinhalese and Tamil new year at a protest site near the president’s office in Colombo, Sri Lanka, Thursday, April 14, 2022. (AP Photo / Eranga Jayawardena)

Sri Lankans shared milk rice and oil cakes to celebrate their traditional new year on Thursday opposite President Gotabaya Rajapaksa’s office, where they camped out for a sixth day demanding his resignation over the worst economic crisis in memory.

Soldiers who were disabled in the island nation’s civil war lit a hearth, Buddhist monks chanted religious verses and others set off firecrackers amid chants of: “Victory to the people’s struggle!” 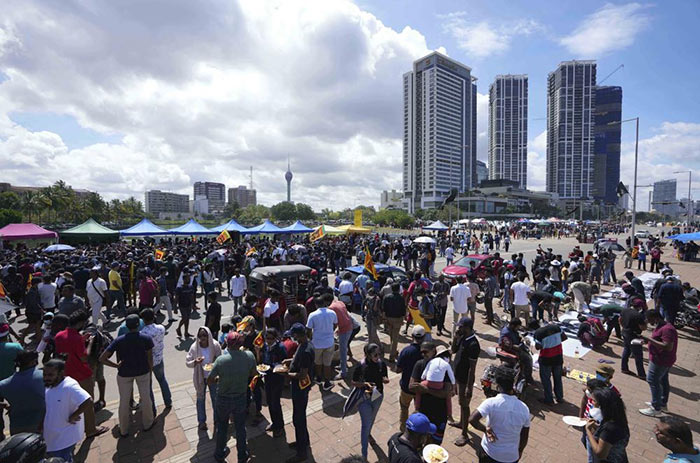 Sri Lankans welcome the dawn of the Sinhalese and Tamil new year at a protest site near the president’s office in Colombo, Sri Lanka. (AP Photo / Eranga Jayawardena)

Protesters are occupying the entrance and surroundings of Rajapaksa’s office, holding him responsible for the economic situation. They also are calling for his powerful family to leave power, accusing them of corruption and misrule.

“Other days our children go to their grandparents to celebrate the new year, but today we brought them here to show them the real situation in the country,” said Dilani Niranjala, who attended the protest with her husband and two sons aged 10 and 8.

“We don’t want to lie to them about what’s going on in the country and go to our village to celebrate the new year. From their younger days, they should see the truth and live with the truth,” she added. 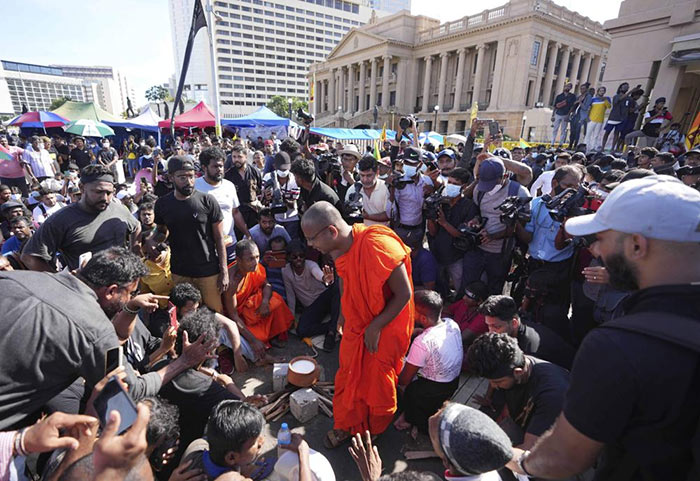 Sri Lankans boil a pot of milk to welcome the dawn of Sinhalese and Tamil new year at a protest site near the president’s office in Colombo, Sri Lanka, Thursday, April 14, 2022. (AP Photo / Eranga Jayawardena)

Niranjala’s husband, Usitha Gamage, who works as a taxi driver, said he had been discouraged watching the news every morning about skyrocketing living costs.

“I am so happy that this struggle is taking place and it gives me new hope and energy,” he said.

“The new year — after we chase them out — is going to be great for us. This is what I have told my children,” he added.

Sri Lankans in recent months have endured fuel and food shortages and daily power outages. Most of those items are paid for in hard currency, but Sri Lanka is on the brink of bankruptcy, saddled with dwindling foreign reserves and $25 billion in foreign debt due for repayment over the next five years. Nearly $7 billion is due this year.

They have been forced to wait in long lines to buy cooking gas, fuel and milk powder, and doctors have warned there is a potentially catastrophic shortage of essential medicines in government hospitals.

Tharushi Nirmani, a 23-year-old student who was helping distribute food to protesters, said the movement was uniting Sri Lankans from different backgrounds.

“All these years, the new year was celebrated by only two ethnic groups — Sinhalese and Tamils — but most of the people who were with us last night were Muslims,” she said, referring to her fellow volunteers. “There is an amazing togetherness.” 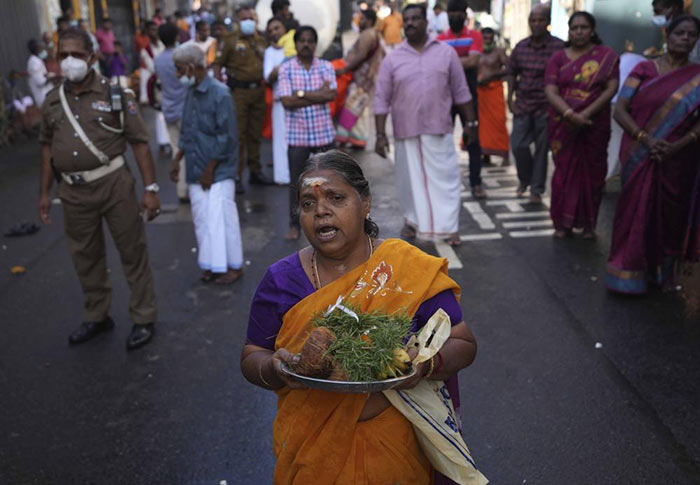 The government announced Tuesday that it is suspending repayments of foreign debt, including bonds and government-to-government borrowing, pending the completion of a loan restructuring program with the International Monetary Fund.

The government says the World Bank has provided $10 million to buy essential medicine and equipment and the health ministry is in discussions with the World Health Organization and Asian Development Bank for additional funding. The government has also appealed to Sri Lankans living and working overseas to donate medicines or money to purchase them.

The World Bank said Wednesday that it is concerned about the uncertain economic outlook in Sri Lanka and is working to provide emergency support for poor and vulnerable households to help them weather the economic crisis.

Much of the anger expressed in weeks of protests has been directed at the Rajapaksa family, which has held power for most of the past two decades. Critics accuse the family of having the government borrow heavily to finance projects that have earned no money, such as a port facility built with Chinese loans.

The president and his older brother, Prime Minister Mahinda Rajapaksa, continue to hold power, despite their politically powerful family being the focus of public ire. The Rajapaksas have refused to resign but the crisis and ongoing protests have prompted many Cabinet members to quit. Four ministers were sworn in as caretakers, but many key government portfolios are vacant.

Parliament has failed to reach a consensus on how to deal with the crisis after nearly 40 governing coalition lawmakers said they would no longer vote according to coalition instructions, significantly weakening the government.

But with opposition parties divided, they have been incapable of forming a majority to take control of Parliament.