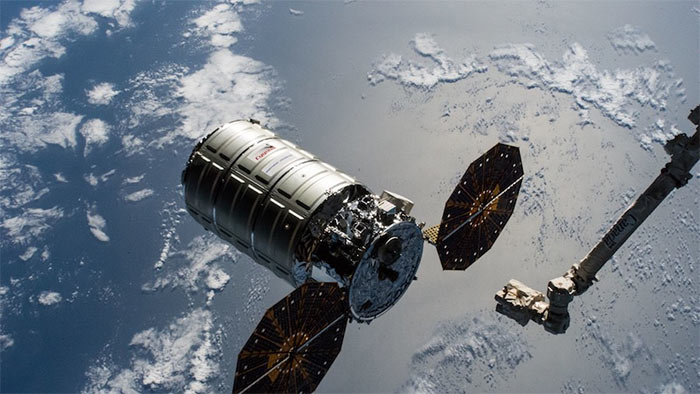 RAAVANA-1 is a research satellite built by two Sri Lankan engineers named Tharindu Dayaratne and Dulani Chamika, from the University of Peradeniya and the Arthur C. Clarke Institute for Modern Technologies.

Roughly 37 hours after launching from the Mid-Atlantic Regional Spaceport (MARS) in Virginia, Northrop Grumman’s NG-11 Cygnus spacecraft has arrived at the International Space Station with 7,600 lbs (3,442 kg) of supplies, according to NASASpaceFlight.com.

For the NG-11 Cygnus, the craft’s arrival at the Station followed a little less than 37 hours of orbital phasing that began with a flawless launch from the Mid-Atlantic Regional Spaceport on Virginia’s Wallops Island on Wednesday atop NGIS’ Antares 230 rocket.

The website added that after lifting off the pad, the Antares rocket pitched southeast to take Cygnus on its multi-minute ride to orbit.

After orbit insertion and deployment, Cygnus successfully deployed its two power generating solar arrays and began a series of burns to raise its orbit from the initial 205 km injection orbit up to the roughly 409 km orbit of the International Space Station.

For Cygnus’ ride to orbit, the Antares rocket’s Castor 30XL second stage’s mission did not end with the deployment of Cygnus but rather continued on with the deployment of 61 small satellites – including 60 ThinSats for the Virginia Commercial Space Authority and one NASA-sponsored 3U CubeSat called Student Aerothermal Spectrometer Satellite of Illinois and Indiana CubeSat (SASSI2).

Cygnus is scheduled to depart the Station in July to begin several months of free-flight testing of news systems before reentering Earth’s atmosphere and burning up over the ocean.

RAAVANA-1 is set to be launched into orbit by the end of May or the outset of June, subsequently, it is expected to orbit the Earth for approximately 15 times per day and its speed is estimated at 7.6 km per second.

RAAVANA-1 was officially handed over to the Japan Aerospace Exploration Agency on Feb. 18.
The satellite is expected to fulfill five missions including the capturing of pictures of Sri Lanka and its surrounding regions.

The RAAVANA-1 is expected to orbit 400 km away from earth. It will have a minimum lifespan of one and a half years.