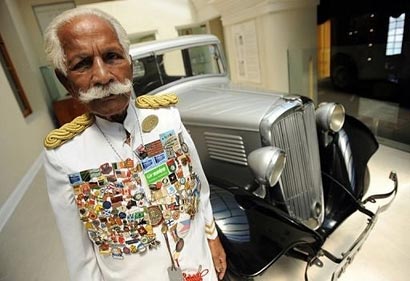 COLOMBO (AFP) – In 70 years of greeting guests to Sri Lanka’s venerable Galle Face Hotel, doorman K. Chattu Kuttan has hobnobbed with everyone from royal heads of state to Bond girls and Soviet cosmonauts. Kuttan, who turns 90 on Monday, has watched the hotel change with the country, from colonial days, through independence and the dark decades of ethnic conflict.

And he has pretty much seen it all, from a Japanese Zero fighter plane crash-landing on the hotel grounds during World War II, to sultry film star Ursula Andress dancing in the ballroom on New Year’s Eve 1976.

Born in India’s Kerala province, Kuttan left his home and took the ferry to Sri Lanka’s northern seaport town of Talaimannar and then made his way to Colombo in 1938.

He worked as a servant for one of Colombo’s elite families before landing a job at the hotel in 1942, weeks after the Japanese bombed the capital. He started as a waiter, and took 50 years to gravitate to the front door.

“Ceylon, as Sri Lanka was known, was a different country then. Famous people like Emperor Hirohito, Richard Nixon, Sir Laurence Olivier and George Bernard Shaw came and stayed with us,” Kuttan recalled.

In colonial days, the adjoining Galle Face promenade that overlooks the Indian Ocean used to host horse races on the green.

“White ladies and gentlemen would watch the races from the terrace of our hotel. The ladies wore hats and were covered with frills and lace,” he said.

In recent years, Kuttan has embraced his role as a living Galle Face institution.

Few guests pass up the chance of picture, and his image and life story have graced the covers and inside pages of some of the world’s leading travel magazines.

“He is probably among the world’s oldest people still in employment, and also one of the most famous hotel employees in the world,” said one of the Galle Face directors, Lalith Rodrigo.

Even as he prepares for his 90th birthday bash, Kuttan, who walks one mile (1.6 kilometres) to work each morning and catches the bus at the end of his afternoon shift, has ruled out any imminent retirement.

“Walking to work and the busy life at the hotel keeps me going,” said the father of two girls, five grand children and one great-grand child.

His monthly pay back then was 20 rupees.

The Galle Face’s glory has somewhat diminished over the decades, and most A-list celebrities and political statesmen now stay at modern luxury hotels that have sprung up in other parts of Colombo.

But its faded splendour still attracts a loyal clientele and newcomers who stare at its prominently displayed list of famous guests, and point out the known and the unexpected, like Soviet cosmonaut Yuri Gagarin.

Kuttan is happy he lived to see the back of Sri Lanka’s 37-year ethnic conflict, which ended in May with the military victory over Tamil Tiger rebels.

“Too many people died. I have seen too many bomb blasts around Colombo. People were scared to move around. Even tourists didn’t want to come. So I’m happy its finally over,” he said.

A non-smoker, teetotaller and lover of vegetable dishes, Kuttan hopes to visit Kerala in April to see his two sisters, aged 93 and 73 — his second visit to India since arriving in Sri Lanka.

In good shape despite his years, Kuttan relies on spectacles for night vision and avoids sweets to keep his blood sugar low.

And his pet peeves? Mobile phones. “I hate those (ringtone) noises. I feel my ear is vibrating after talking into one.”