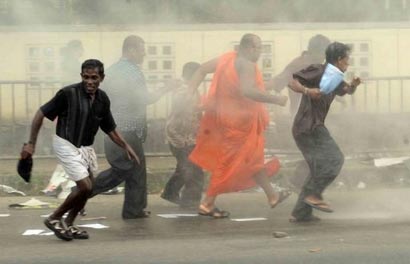 “He wanted me to convey to the people and especially the troops to remain calm and not to be provoked by his illegal arrest,” said Anoma Fonseka, who met with her detained husband late Wednesday.

“They are trying to break his spirit, but they won’t succeed,” she told reporters.

Anoma Fonseka was granted access to her husband at the naval detention centre where he is currently awaiting court martial for conspiring against the government. He was arrested on Monday.

His appeal for calm followed violent clashes outside the Supreme Court in Colombo as pro-government activists pelted stones at Fonseka’s supporters.

Riot police used tear gas and water cannon to disperse the crowds outside the court, where his wife had filed a petition demanding his release. A hearing has been set for Friday.

The opposition, meanwhile, said it had enlisted the help of the influential Buddhist clergy to put pressure on the government of President Mahinda Rajapakse, who saw off Fonseka’s challenge in January’s presidential election.

“We are not planning an agitation outside the court when the case is taken up tomorrow, but we don’t know what can happen,” opposition leader Karu Jayasuriya told AFP.

“What we have done is to ask the Buddhist monks to use their influence over the government,” he said.

Fonseka’s wife told reporters at her Colombo home that the four-star general had been denied visits by his doctor, who has treated him regularly for injuries he received in a suicide bombing in April 2006.

She said she had asked the International Committee of the Red Cross to ensure that her husband can see his regular doctor, but added that the government had ruled out any such intervention.

“I fear for my husband’s life,” she said, adding that metal shrapnel lodged close to his heart and kidneys needed to be monitored.

She also claimed her husband had not been formally charged in apparent violation of the Army Act which requires charges to be brought within 24 hours of arrest.

“It is clear that what we have today is the law of the jungle,” she said. “They are still trying to find charges against him.”

A regional human rights group on Thursday warned that Fonseka was being deprived of “due process” by having his case handled in a military rather than a civilian court.

“This is also depriving the public of information on his case,” the Hong Kong-based Asian Human Rights Commission said in a statement.

The government has yet to spell out the specific allegations, but defence ministry spokesman Keheliya Rambukwella said Fonseka had colluded with opposition politicians last year while still heading the army.

The AHRC said Sri Lanka was engaging in “alarming attempts to repress the avenues of the political participation of the opposition and the entire population in general.”

The increase in tensions came as President Rajapakse dissolved parliament on Tuesday and called snap legislative elections for April 8.

Rajapakse was returned to power for a second term last month after easily defeating Fonseka in a bitter presidential election battle.