Jackson Anthony and the moral responsibility of an artist 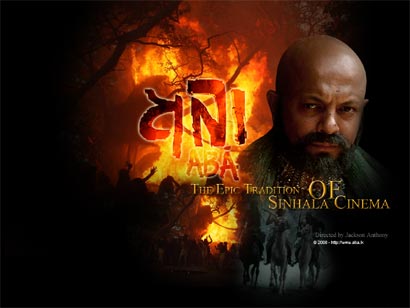 Write on my gravestone: “Infidel, Traitor.”–infidel to every church that compromises with wrong; traitor to every government that oppresses the people. – Wendell Phillips

(February 11, Colombo, Si Lanka Guardian) In his article, Aho Kalawa that was published in Ravaya newspaper Mr Gamini Viyangoda implies that Jackson Anthony had betrayed his conscience as an artist. Before coming to a drastic conclusion several co factors should be evaluated on Jackson Anthony and his artistic career. Born as a non Buddhist Jackson Anthony had a deep-rooted unconscious fear of rejection from the mainstream Buddhist culture. According to a self-revelation by Jackson Anthony when he was a school boy he made a visit to Anuradhapura and was astonished by the ancient ruins. Concurrently he had a sad feeling that he did not belong to this ancient enrich Buddhist culture. Then he cried in front of the archeological monuments. This fear of rejection may have triggered him to master the Sri Lankan history.

He is a gifted actor who can convey the artistic message to the viewers sometimes only with his facial expressions and gestures. His talents can be compared to that of famous actor Kevin Costner. He hosted the illustrious history program on TV about Maha Vansaya. How could a man with multi talents sell his soul as Mr Viyangoda proclaims?

Mr Gamini Viyangoda highlights that in a TV show Jackson Anthony mentioned Puritan was a philosopher without knowing that it was a 16th century religious movement. In this context, Jackson Anthony made a big mistake because it was not a person’s name but a religious reform movement

that took actions to purify the Church of England by eliminating every shred of Catholic influence.

The other factor Mr Gamini Viyangoda stated was Jackson Anthony does not serve the public as a talented artist; he uses his popularity and artistic as well as communication skills to serve the regime that is in power ,sometimes twisting the historical facts. Has Mr. Jackson Anthony forgotten the utmost obligation of an artist to serve the people?

Leo Tolstoy characterizes art in terms of the relationship of the observer/perceiver both to the artist and to others who perceive the work. According to Tolstoy, art is a human activity. He believed that art is an important condition of human life, as it is used to communicate human feelings and emotions. He further emphasized that the activity of art is based on the fact that a man, receiving through his sense of hearing or sight another man’s expression of feeling, is capable of experiencing the emotion which moved the man who expressed it.

Based on Leo Tolstoy’s notion an artist can make a huge impact on the society directing people towards the advancement and the betterment of the civilization. What is the moral responsibility of the artist with respect to others, and with respect to himself? The artist represents the conscience of the society. He should not betray it for money, fame or power.

The moral responsibility of the artist

The deteriorating condition of our planet has reached a point which is undeniably critical. If we are to survive as a species and maintain a decent quality of life, long-term goals and an active program of achieving them are certainly indicated. The creation of a society in a steady state of economic and ecological equilibrium is the only way to proceed. Not only would such a pursuit require determination, but it would be a challenge to our ingenuity and creativity. The transition from a growth- and consumer-oriented society to a society geared toward equilibrium entails necessary changes in our values. The artist could and should assume a leading role in bringing about this change.

There has been a strong relationship between the arts and politics. Although art can be an individual expression for some people, it can and should also be viewed as the collective effort, on the part of the artists, of representing their individual community, or culture as well. Professor Boris Groys at the Academy for Design in Karlsruhe, Germany, and Global Professor at New York University argued that art is a powerful political tool. Art, Groys writes, is produced and brought before the public in two ways—as a commodity and as a tool of political propaganda.

Artist can influence his society and the political system for the betterment of the people helping to strength human rights and giving a voice for social justice. It does not mean that the artist always has to be in an opposition role antagonizing the political system. The artist can co exist with the power system but should influence when the system turns against the will of the people. It can be done through his creativity, intellect and charisma.

The charisma of Andare

Andare was a comedian and a poet who worked for the king. Although he moved with the king and the nobility, he always maintained his integrity and self-respect. If the king was wrong, he used his poetic talents to re correct the king. Andare profoundly studied the positive and negative part of the King’s personality. He knew how to convey the message without hurting or antagonizing King’s emotions.

In one of his short stories, Maxim Gorky tells us about a poet who worked for the ruthless Conquer Tamerlane. All the officers and noblemen in the inner circle did not confront Tamerlane’s words and deeds except the poet. The poet had the courage to point out the great Conquer’s idiocy. When others blindly praised and hailed the Conquer, the poet sardonically but in an artistic style pointed out the Conquer’s errors. The artist had the intellect and artistic skills to present it without arousing Tamerlane’s anger. He could do it because he was a true artist who had feelings for the people.

Joseph Stalin created cult personality during his reign in the Soviet Union. Stalin wanted to use the literary skills of the great novelist Mikhail Sholokhov to glorify his image. Mikhail Sholokhov knew the slaughter that Stalin did in Gulags and the repercussions of the artificial famine in Ukraine, which caused millions of innocent lives following the Stalinist collectivization. Sholokhov had a true conscience and self-dignity to deny the offer. He did not write the biography of Great Stalin or put Stalin’s figure in his novels.

Sholokhov respected Stalin for leading the victory over Fascist Germany and liberating the USSR. But he refused to worship Stalin blindly like many others. On the contrary, he challenged Stalin’s prejudices of Russian POW s. According to Stalin POW s were traitors who did not fulfill the military task. Many POW s were executed or deported by Stalin when they retuned to their motherland. Sholokhov disagreed with Stalin on this point. In his outstanding short story Sudba Cheloveka (Plight of a Person) Mikhail Sholokhov, discloses a character named Andray Sakalove – a Red Army POW who escaped with a heroic effort.

Oliver Stone who stood against US Presidents

The former Vietnam veteran and the film director Oliver Stone produced his first anti war film titled Last Year in Vietnam in 1971. As an artist, Oliver Stone had guts to stand against a bright shining lie of Vietnam. He publicly opposed the unjust discussions of Nixon and Lyndon Jonson concerning the War. He was a people’s artist. Today Oliver Stone is respected as an artist with a truce conscience.

Gamini Fonseka – Artist and the Politician

Although Gamini Fonseka did party politics his vision was wider then an average Sri Lankan politician. He did not limit his scope only to be a UNP politician. As an artist, he used his creative skills for the betterment of the society. He committed some of his films to enhance the racial harmony in Sri Lanka educating the public about the emptiness of racial violence. He moved with powerful politicians but had courage to point his finger when there was an error and injustice. He popularized the term Odokku Kukka or the terrier that wags the tail to every word uttered by its master. Gamini used this term to criticize artists who use their medium of art to glorify politicians.

If an artist does not serve the interest of his patrons, he is neglecting his moral responsibility. If the artist serves only the King and deceives the public for material gains, people will discard him someday. Artists can have political patronage for material benefits after all its not a dreadful sin. No one is expecting artists to live like vagabonds. Dramatist Sugathapala De Silva never went after politicians asking for favours. But he had to break his holy principle once when he needed a house. Sugathapala De Silva had to make a request to President Premadasa. Therefore, Jackson Anthony’s stand will not be questioned by his patrons as long as he treats them honestly and with dignity.

Home » Jackson Anthony and the moral responsibility of an artist