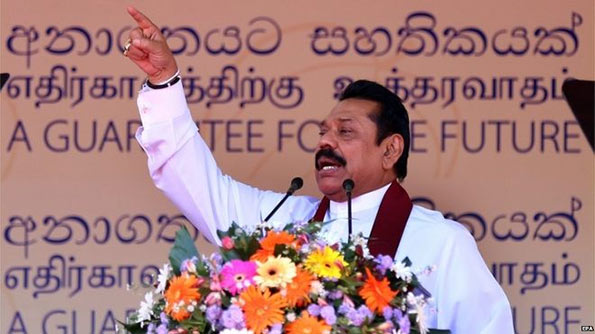 Sri Lanka’s former president Mahinda Rajapaksa has vowed to win an outright majority in parliamentary elections due on 17 August.

Mr Rajapaksa told BBC Sinhala he was confident of winning more than half the seats in parliament.

He is hoping to become prime minister, but the result is far from clear-cut.

A Rajapaksa win would mean an uneasy cohabitation with party rival Maithripala Sirisena, who beat him in presidential elections in January.

Their Sri Lanka Freedom Party remains divided over the two men – the president failed to stop his predecessor from standing as a party candidate in the polls.

Mr Rajapaksa was giving his first BBC interview since he was elected president in 2005 – relations during his nine years in power were strained over accusations of human rights abuses and media freedoms being curtailed.

“Clearly we will secure 117 seats,” he told BBC Sinhala.

He rejected claims by the current Prime Minister, Ranil Wickramasinghe, that his campaign was in disarray.

But not everybody seems to agree with Mr Rajapaksa’s optimistic assessment of how votes will be cast.

In fact Mr Rajapaksa’s close allies do not seem to share his view either.

A close relative of Mr Rajapaksa privately told me that they are expecting about 105 seats. The general secretary of the UPFA told the BBC’s Azzam Ameen in Colombo that it may not be easy for any of the main parties to secure an outright majority.

Perhaps it is because of that concern that Mr Rajapaksa has changed his tough approach towards the media, including the BBC.

After nearly a decade of strained relations, Mr Rajapaksa, however, was friendly and even laughed while he answered questions.

He said he does not regret any of the policy decisions he took while in power – apart from one.

“Calling an election two years ahead of schedule, I think, was a wrong decision,” he said.

“I haven’t done anything else for me to regret.”

He strongly defended the controversial impeachment that ousted Chief Justice Shirani Bandaranaike in January 2014. The move was heavily criticised by the international community and legal watchdogs as an authoritarian and undermining the rule of law.

“We did everything as per constitutional provisions,” he said.

And he bristled when questioned about his amendment to the constitution that removed the two-term limit on the president.

“People know very well how long one should be allowed to stay. I believe we should allow the public to decide.”

Perhaps most controversially, Mr Rajapaksa also accused his successors of not doing enough to investigate killings and abductions that occurred during his tenure.
The killing of senior journalist Lasantha Wickramatunga, a fierce critic of Mr Rajapaksa, shocked the world in 2009.

“The same Mr Ranil Wickramasinghe has publicly accused a certain person of murdering Lasantha. Now they can investigate. They were in power for six months,” Mr Rajapaksa said.

The same argument applies to the disappearance of cartoonist Prageeth Eknaligoda, said the former president.

Mr Eknaligoda, a political columnist and another strong critic of Mr Rajapaksa, has been missing since January 2010.

“Why they don’t investigate now? Is it because those who are accused are in the UNP government? I truly suspect it is the case.”

Many will find his accusations extraordinary, coming as they do from a man who was in almost total control of Sri Lanka for years.

But interestingly he was very careful not to criticise President Sirisena, who now heads the party and coalition Mr Rajapaksa himself led for nearly a decade.