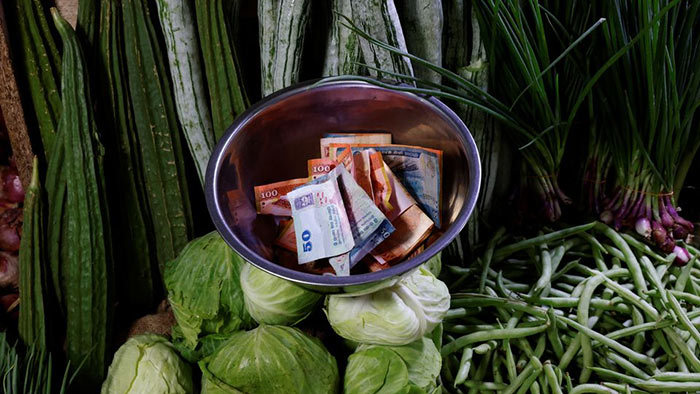 Sri Lankan rupees are seen in a bowl at a vegetable vendor’s shop. (Reuters / Kim Kyung-Hoon)

Food prices were up 69.8% in November, while non-food inflation was 60.4%, the Department of Census and Statistics of the crisis-struck nation said in a statement.

Sri Lanka has been struggling with soaring inflation for nearly a year, partly triggered by its worst financial crisis in seven decades and an ill-thought out ban on chemical fertilizer implemented last year, which has since been reversed.

“November has shown a faster deceleration than expected and this is likely to continue but the easing could be offset by an electricity power increase the government may implement early next year,” said Dimantha Mathew, head of research, First Capital.

Central Bank of Sri Lanka Governor Nandalal Weerasinghe predicted that if the current trend of monetary policy was followed, inflation could drop to 4% – 5% by the end of next year.

The NCPI captures broad retail price inflation across the island nation and is released with a lag of 21 days every month.

The Colombo Consumer Price Index (CCPI) (LKCCPI=ECI), released at the end of each month, is more closely monitored. It acts as a lead indicator for broader national prices and shows how inflation is evolving in the biggest city of Colombo.

The CCPI eased to 61% in November, data showed last month.

In September, Sri Lanka reached a preliminary deal with the International Monetary Fund for a $2.9 billion bailout but it needs to get its debt on a sustainable track and put its public finances in order before funds can be disbursed.