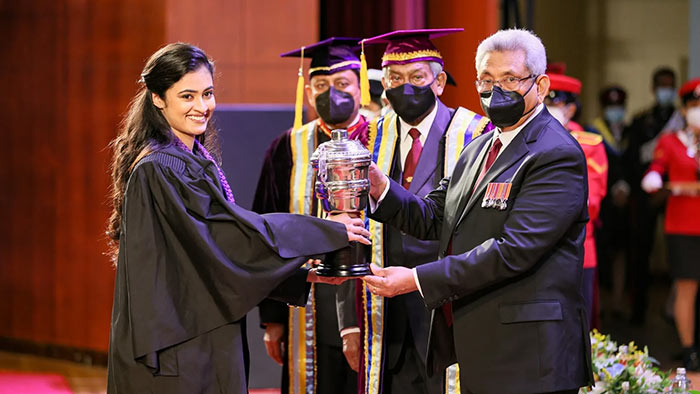 Sri Lanka President Gotabaya Rajapaksa says there is a mismatch between education generally on offer in Sri Lanka and what is necessary for the country to develop in the 21st century.

The President said as a result he has constantly called for educational reforms, especially in the tertiary education system.

President Rajapaksa addressing the General Convocation of the Sir John Kotelawala Defence University at the BMICH yesterday said he strongly believes that no matter the degree programme followed by university students, they must all graduate having gained at least some proficiency in information technology.

“There is a mismatch between the education generally on offer in Sri Lanka and what is necessary for our country to develop in the 21st Century. This is why I have constantly called for educational reforms, especially in our tertiary education system’’ said President Gotabaya Rajapaksa addressing the General Convocation of Sir John Kotelawala Defence University held at the BMICH, today (09).

‘I strongly believe that no matter the degree programme followed by university students, they must all graduate having gained at least some proficiency in information technology. They should also receive exposure to other skills necessary for success in today’s world, including critical thinking, entrepreneurship, and English language skills’ the President further said.

‘I am pleased to note that several of these reforms have already been implemented by our universities, and that more are to be introduced next year. One of the early accomplishments of my administration was increasing the number of places for students in universities throughout Sri Lanka by ten thousand’, President Rajapaksa added.

‘The old objections about higher education institutions outside the state universities being education shops that sell degrees is nonsensical’, the President further said.

This was the 32nd General Convocation of Sir John Kotelawala Defence University.

One PhD Graduand, 227 Master’s Graduands and Postgraduate Diploma holders from the Faculty of Graduate Studies, and 1180 Bachelor’s Degree holders from different faculties of KDU were among the 1408 graduands who received parchments at this year’s convocation.

President Rajapaksa presented special awards to Cadet Officer S.H. Rodrigo as the Best Army Officer, Lieutenant S.D Karunasena as the Best Naval Officer, Fg Off S.K.S. Rukshan as the Best Air Force Officer. The sword of Honour for the Best All-Round Performance of Intake 34 was awarded to Lt L.D.I. Liyanaarachchi.

The General Sir John Kotelawala Defence University was established in 1981 to meet the educational needs of the officers of the three Armed Forces. It was elevated into a fully-fledged University in 2009 by then Defence Secretary Gotabaya Rajapaksa. In 2009, civilian students were granted the opportunity to study there. At present, members of the three Armed Forces and local and foreign students can pursue doctoral, postgraduate and postgraduate diploma courses at the University.

Minister Keheliya Rambukwella, Ambassadors and High Commissioners, Defence Secretary and Secretaries of other ministries, Chief of Defence Staff and Commanders of the Armed Forces, the Inspector General of Police, Director General of the Civil Defence Force and other Heads of the Security Sector, Chancellor of General Sir John Kotelawala Defence University General Gerard de Silva, Vice Chancellor Major General Milinda Peiris and the members of the academic and non-academic staff were also present.