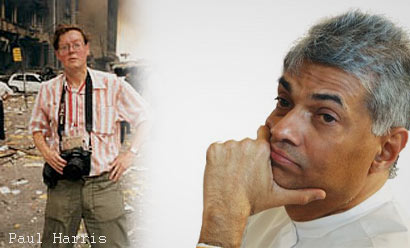 In November 2002, a writer and military analyst working in Sri Lanka between 1996 and 2002 as special correspondent for Jane’s Intelligence Review and the London Daily Telegraph was given 24 hours notice by the Ranil Wickremasinghe Government to leave the country. The reason for his cancelation of visa was that Paul Harris was critical of the 2002 Cease Fire Agreement and the LTTE. Two years later, LTTE leadership issued a death sentence on Paul Harris for his writings and speeches and he has been hunted by the LTTE death squads and was under protection of the British secret service shifting locations. Therefore we question the doublespeak of those currently spearheading media freedom and rights of journalists in the context of their treatment towards Paul Harris at the instructions of a terrorist outfit.

The headline of the 2002 Island editorial read as follows ‘Much of the local and, particularly international, goodwill that has accrued to Prime Minister Mr. Ranil Wickremasinghe has been because of his liberal attitude towards the media. Whereas the People’s Alliance under President Chandrika Kumaratunga became notorious for the harsh manner in which they treated the media, Mr. Wickremasinghe, even in the Opposition, was in touch with the media and pledged to liberalise media laws anddismantle certain institutions that were considered inimical to freedom of expression.’ The same editorial goes on to say that the action on Paul Harris would ‘smear’ his image. That is exactly what it did and all those associated with the action remain people with tarnished images.

Let us note that Paul Harris was one of the first to bring to the open loopholes in the Cease Fire Agreement bringing to light the manner LTTE would maneuver itself. Harris also accused the Wickremasinghe Government of ‘inaction’ for the ‘greatest give-away in history’. So the Ranil Wickremasinghe Government that now talks of media freedom and journalist rights at the instructions of the LTTE and Anton Balasingham declared Harris a ‘threat to national security’ and Harris was asked to leave the country. The present foreign minister then justice minister simply sat silent. He ‘unwittingly became the most effective propagandist for the LTTE within country.

It was the same person who used ‘threat to national security’ as a reason to evict Paul Harris from Sri Lanka. http://www.lankaweb.com/news/items02/111102-4.html

Paul Harris technically addresses the LTTE Organization as “Committed Terrorists”. Rightfully he states that the LTTE terrorists approved themselves time and again to be “Unreformed and Brutal”.

The President’s office (Chandrika Kumaratunga) issued a statement on November 6 accusing the government of preventing freedom of the press. In part, it stated, “Freedom of expression and the right of dissent are bedrock requirements for a democratic and free society and this insidious silencing of an often lone voice against the conventional wisdom of the government is a serious erosion of media freedom and (a) set back for democracy in Sri Lanka.”

Some quotes from Paul Harris:

“I’ve seen the blood and miserly with my eyes which terrorists inflict on those people whose interests they often claim to represent. I don’t like what terrorists stand for and don’t like their methods; and I do believe that their very methods intrinsically, deny terrorists the capability of engaging in any meaningful peace process”.

“All the predictions I made ……are now becoming realities. They have become realities in the form of continuation of the war machinery and the use of civilians and school children to attack military camps.”

“This is in stark contrast to the supine efforts of previous governments who flinched from taking on the LTTE which had, accordingly, been able to engender a myth of invulnerability. Only six or seven years ago, it appeared that Sri Lanka might be terminally divided: a fate which would have doomed this unique and wonderful country as a sovereign entity.’

“The loss of any civilian life is a matter for profound regret and, inevitably, many innocents will be victims of this final round of the conflict. However, we must not forget the tens f thousands of civilians who have already died in a war that has gone on far too long. The end of this war and the extermination of a longstanding terrorist threat must now be the priority. It is disingenuous of the British and US governments, supposedly dedicated to the worldwide war on terror, to call for a ceasefire at this vital final stage in the conflict.”

“Foreign journalists who have suddenly arrived in Sri Lanka at this late stage in a conflict that has gone on for decades are questioning on channels like the BBC, CNN and Al Jazeera whether real peace can emerge from ‘the military solution’. In daily broadcasts they are claiming there is no other Tamil leadership except the LTTE. Such observations betray their limited understanding of the conflict. If there be no alternative leaders, it is because the LTTE has pursued a specific policy of the eradication of all Tamil politicians who did not adopt their creed of repression and lack of democratic choice. Some of the most brilliant members of the Tamil community have been cut down, men like Lakshman Kadirgamar, who I was privileged to know and work with, and countless others in Jaffna who bravely stood out against the brutality of the Tigers.”

“I believe the enormously talented Tamil community of Sri Lanka is fully able to produce leaders of integrity and ability once one man is removed from the scene. I refer, of course, to Velupillai Prabhakaran, one of the most vicious terrorists the world has ever produced. Let us not forget, the LTTE is a one man band representing the views and aspirations of its brutal leader. The LTTE has never offered any sort of a future for the majority of Tamils.’

‘Hopefully, at an early date we shall see the capture or death of Velupillai Prabhakaran, who has inflicted so much misery on all the peoples of Sri Lanka. To claim him as the representative of the majority of Tamils is a travesty of reality.”

“Whatever justification there might have been for the demand for “Eelam” has been completely removed by the depraved conduct of the Tiger leadership. Operating a rigid totalitarian system of which Stalin would have been proud, the Tigers have systematically hunted down and assassinated prominent Tamils who supported a united, multi-ethnic Sri Lanka. Well before al-Qaeda popularised the suicide bomb, this form of terrorism was pioneered by the Tigers, who have also made extensive use of child soldiers and of child suicide bombers. Prabhakaran is said to personally choose boys aged 14 to 16 for recruitment to the “Black Tigers” suicide bomb squads.”

Paul Harris present at the first interview given by Prabakaran in Kilinochchi writing to the Telegraph says Prabhakaran said Sri Lanka’s Tamils, who are mostly Hindu, have cultural roots in India. “India is our fatherland,”

Paul Harris returned to Sri Lanka on the invitation of World Alliance for Peace in Sri Lanka and Sansadaya (Forum) to attend a conference and delivered a lecture on LTTE.

DELIGHTFULLY IMPERFECT is a book written by Paul Harris launched in 2007 giving a unique perspective on politics and conflict in Sri Lanka.

It was Paul Harris who first revealed that the GLPeiris-Ranil Wickremasinghe ‘peace’ arrangement with Prabakaran was the greatest give away in history! Peace cannot be achieved by giving a ‘piece’ of the country. Along the years so many others have voiced similar predictions about the representatives chosen to defend the nation and the ideologies they end up pushing into effect using their official status and the dangers such people are likely to cause. That these warnings have fallen on deaf ears is one of the key reasons why Sri Lanka has failed to build up a proper defense against baseless allegations that have been the source for humiliations. We do not expect the people who enjoy state luxuries at the expense of the tax payer to be silent when the country is being attacked and leave it to the President and the Defense Secretary to be the only 2 to come forward to respond to the attacks.

It is no better a time than now for the Government to take stock of all those who are tasked to defend the nation for it is their inabilities, incapabilities and lack of will that is primarily responsible for the current imbroglio and we continue to wonder why these same people are being kept to create further catastrophes.