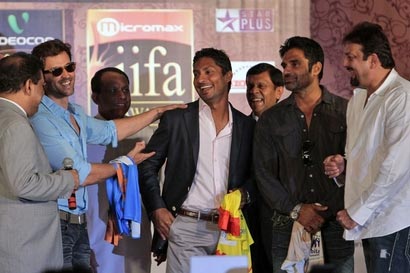 The brand ambassador of the International Indian Film Academy (IIFA) awards, Amitabh Bachchan, his actor son Abhishek and daughter-in-law Aishwarya Rai — Bollywood’s leading couple — have not yet confirmed their participation.

“About 97 percent of the top stars have confirmed with the exceptions of movie stars Amitabh Bachchan and his family,” Sri Lanka’s junior economic development minister, Lakshman Yapa Abeywardene, told reporters.

“There is a lot of protest from the (Tamil) Tiger lobby in Tamil Nadu to the Bollywood fraternity to boycott the IIFA Colombo awards. But, we will go ahead with the event as planned,” he said.

Two people were killed when a Khan concert in Colombo was bombed in 2004, and he vowed at the time that he would not visit Sri Lanka again.

The pro-Tiger lobby argues that staging the IIFA awards in Sri Lanka endorses President Mahinda Rajapakse’s stand on the war.

But the Sri Lankan government says that Bollywood’s presence will improve the island’s international image and promote post-conflict economic development.

1 Response to Stars may skip Bollywood awards in S.Lanka: govt