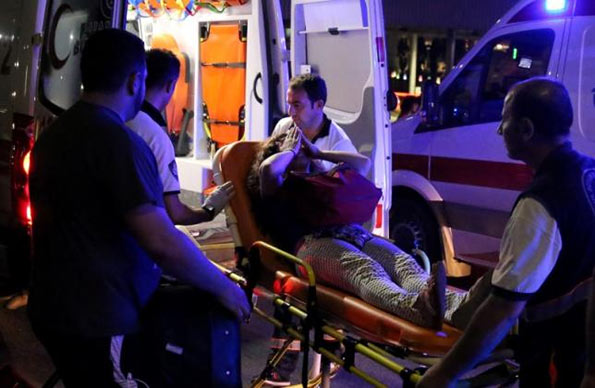 Three suicide bombers opened fire before blowing themselves up in the main international airport in Istanbul on Tuesday, killing 31 people and wounding close to 150, officials said.

Police fired shots to try to stop two of the attackers just before they reached a security checkpoint at the arrivals hall at Ataturk airport, Europe’s third-busiest, but they detonated their explosives, one of the officials said.

A Turkish official said the vast majority of those killed were Turkish nationals but foreigners were also among the dead.

“There was a huge explosion, extremely loud. The roof came down. Inside the airport it is terrible, you can’t recognize it, the damage is big,” said Ali Tekin, who was at the arrivals hall waiting for a guest when the attack took place.

A woman named Duygu, who was at passport control having just arrived from Germany, said she threw herself onto the floor with the sound of the explosion. Several witnesses also reported hearing gunfire shortly before the attacks.

“Everyone started running away. Everywhere was covered with blood and body parts. I saw bullet holes on the doors,” she said outside the airport.

There was no immediate claim of responsibility for the latest in a string of suicide bombings in Turkey this year, but the Dogan news agency said initial indications suggested Islamic State may have been responsible, citing police sources.

A Turkish official said it was too soon to assign blame.

The attack bore some similarities to a suicide bombing by Islamic State militants at Brussels airport in March which killed 16 people. A coordinated attack also targeted a rush-hour metro train, killing a further 16 people in the Belgian capital.

Paul Roos, 77, described seeing one of the attackers “randomly shooting” on the departures floor of the terminal.