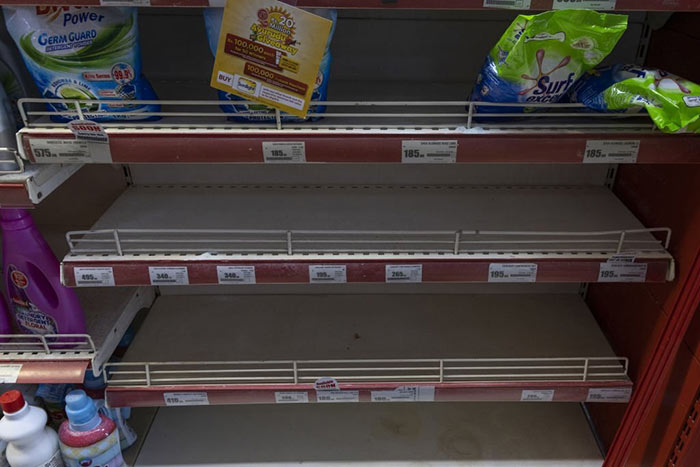 As the fuel shortage has sent the country into a lockdown situation, people, particularly those in Colombo and the suburbs, are facing a risk of losing access to food and other essential stuff, with the retailers struggling to restock their shelves on time, as they scramble to refuel their delivery fleets.

The shelves at the supermarkets in Colombo and the suburbs have gone largely empty since the weekend and the store managers and staff say they do not get supplies on time, due to the crippling fuel shortage.

With the government further limiting fuel supplies from yesterday, they fear their orders could get further delayed.

It isn’t clear as of now whether the fleets engaged in food and other consumer goods delivery were made an essential service when providing the limited fuel stocks, which are estimated to be sufficient for only next 10 days.

Meanwhile, small grocers are also on the brink of closing shop after their supplies ran dry, as the suppliers, who used to come every week or fortnight for deliveries, haven’t come for weeks now.

Transparency International Sri Lanka filed a Fundamental Rights petition this week in the Supreme Court, calling for actions against those who were directly and indirectly responsible for the collapse of the economy, throwing many millions into starvation and poverty.