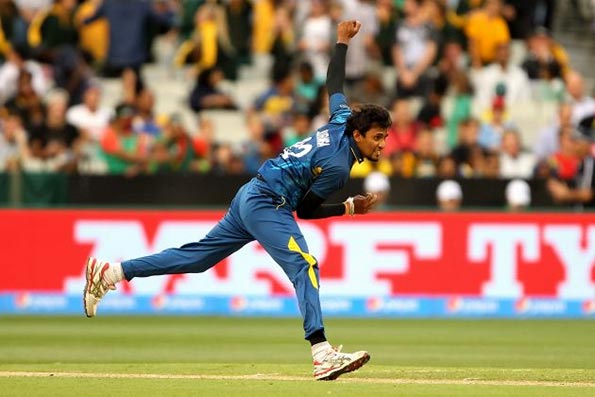 Sri Lanka fast bowler Suranga Lakmal has been fined for breaching Level 1 of the ICC Code for Players and Players Support Personnel during his side’s Pool A match in the ICC Cricket World Cup 2015 against England at the Wellington Regional Stadium in Wellington on Sunday.

Lakmal was fined 30 per cent of his match fee by David Boon of the Emirates Elite Panel of ICC Match Referees, after he pleaded guilty to breaching Article 2.1.8, that relates to ‘conduct contrary to the spirit of the game’.

The incident happened in the 50th over of England’s innings when Lakmal bowled a second consecutive high full pitched ball to Jos Buttler, after being given a first and final warning by on-field umpire Rod Tucker earlier during the same over. The bowler was stopped from bowling and reported to the ICC Match Referee, as is required under Clause 42.4.2 of the ICC Cricket World Cup 2015 playing conditions, relating to Dangerous and Unfair Bowling.

Explaining his decision, Mr Boon said: “While making my decision, I took into account that it is was dangerous and unfair bowling, there were no mitigating circumstances, and there was no remorse from the bowler.”