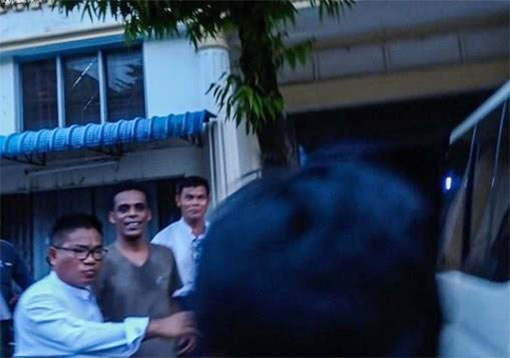 A Sri Lankan man, believed to have connections with those involved in the Easter bombings that killed at least 250 people, was arrested in Myanmar on Thursday afternoon, irrawaddy.com reported.

Abdul Salam Irshad Mohmood, 39, was detained by police when he appeared at an immigration office in downtown Yangon to renew his visa.

The arrest came after Myanmar Tourist Police’s request on Wednesday to the country’s Hotel and Tourism Department to report if the man had registered at hotels or guesthouses in the country. In Myanmar, hotels and guesthouses are operated on a license approved by the department.

According to a letter sent out by the department to hotels and guesthouses, the suspect, a Sri Lankan citizen, arrived in Yangon on a tourist visa in January 2018. The letter also provides his passport number as well as his date of birth.

An official from the Tourism Police said the arrest was made at 3:20 p.m. by police acting on the shared information of the suspect’s data.

‘Now he has been referred to the police’s Special Branch [for further investigation into his connections with the suicide bombings],’ he added.

The Tourist Police said Abdul Salam Irshad Mohmood has over-stayed (his tourist visa) for one year and two months.

It is not clear whether Sri Lankan authorities tipped off the Myanmar government with the information that the suspect is in Myanmar.

In the wake of the Easter Sunday bombings, Sri Lankan authorities have said all suspected plotters and those directly linked to the attacks have either been arrested or are dead. They said the bombings were believed to have been carried out by two little-known local Islamist groups, the National Tawheed Jamaath (NTJ) and Jamathei Millathu Ibrahim (JMI). Islamic State has claimed responsibility for the attacks.