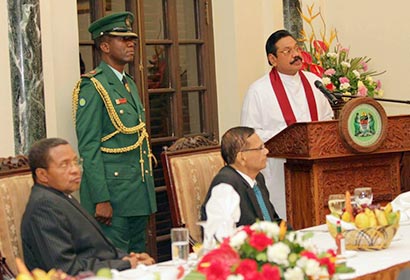 President of Tanzania Jakaya Mrisho Kikwete while reaffirming his country’s fullest support to Sri Lanka to host 2013 Commonwealth Heads of Government Meeting (CHOGM) pledged that he would persuade other Commonwealth members of Africa to participate.

He gave this assurance yesterday during bilateral discussions with President Mahinda Rajapaksa who is currently on a state visit to Tanzania.

President Rajapaksa while apprising the Tanzanian President of Sri Lanka’s preparation to host 2013 CHOGM invited Tanzania to take part in the Commonwealth Business Forum on the sideline of the Summit.

The Tanzanian President said he will send a substantial delegation to the forum. President Kikwete said he has not heard of Any African country saying it will not participate at the forthcoming CHOGM.