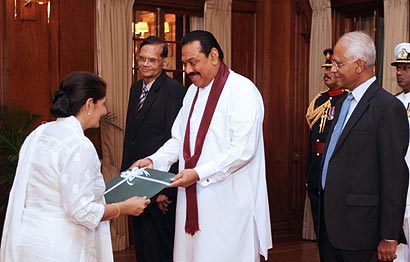 Ten (10) new Ambassadors and High Commissioners handed over their credentials to President Mahinda Rajapaksa at the President’s office on Friday 05th November.

Accordingly eight (8) new Ambassadors from Switzerland, Norway, Mongolia, Cambodia, Mexico, Oman, Peru and Vietnam and two (2) new High Commissioners from Pakistan and Cyprus handed over their credentials at the ceremony.

External Affairs Minister Prof G.L. Peiris and Secretary to the President Lalith Weerathunga were present. The new diplomats are in Colombo as follows