Terrorists can be arrested without AG’s advice – DSG 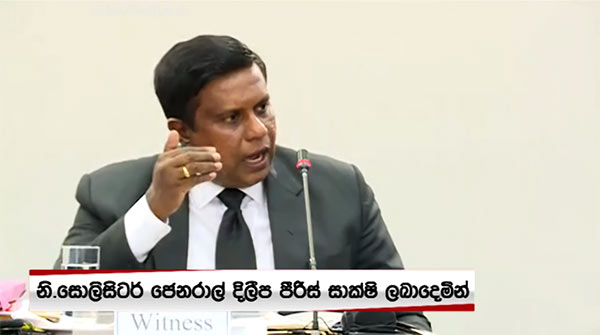 Testifying before the Parliamentary Select Committee probing the Easter Sunday carnage DSG Peiris said that the TID was empowered to arrest suspected terrorists. The TID did not need to wait for instructions to proceed with their arrests. The fault lay with the TID. “The TID has a trump card for every delay. They say that they sought advice from the AG Department and the latter did not provide instructions to proceed.”

DSG Peiris: A file referred to the Department of Attorney General by the TID was subjected to discussion at the PSC. A wrong impression with regard to the matter had been created in the minds of the people. We requested the Department’s Administrative Division to seek an opportunity to appear before the PSC to set the record straight. The Department is empowered by the Section 393 of the Chapter 33 of the Criminal Procedure Act to instruct and to provide legal advocacy to police and other investigators.

We provide advocacy to proceed with the cases if there is a reasonable prospect of conviction of the suspects named in the case. We do not usually address matters forwarded to us by the general public. However, we receive public petitions and if the matter contained in the letter is leading to a serious offence or violation of laws then we may open a file. Similarly, we received a letter from Al Haj Abdul Jawadh Alim Waliyyullah Trust signed by Moulavi K.R.M. Sahlan. That was a letter addressed to the IGP and copied to us. The letter had been hand delivered.

It requested the involvement of law enforcement authorities to investigate the threats against innocent Muslims from the National Thowheed Jamaath. Some pictures had been attached to the letter, showing mobs carrying swords marching on the streets of Kaththankudy. We asked the police on June 22, 2017 to update us on all investigations with regard to the NJT. So far we have not received any response from the IGP or any police station or any other law enforcement agencies. Later, I came to know that the TID had investigated the NJT and Zahran Hashim.

Dr Jayatissa: From where and when did you came to know of that investigation? Was it after the attacks?

DSG Peiris: Yes, after the attacks. We found that Moulavi Sahlan on the very same day he handed over the letter to our department had gone to the TID too and handed over a copy of the same letter with two CDs containing video clips. However the police had not recorded a statement from Moulavi Sahlan. It took two years for them to do so.

M.A. Sumanthiran: Yes, we could suppose that particular letter was not attended to. But there have been several other investigations by the Police and TID. As a part of those investigations, investigators have sought your instructions to proceed with. According to those witnesses who came to the light that the AG Department could not furnish them with the instructions they had sought.

DSG Peiris: The TID should have arrested them. They do not need to consult others. They could have done that on their own if they suspected them to be terrorists. They sent us three files. They are incomplete files. Those files did not have anything to form an accusation and to take legal action. The files referred to us by the TID did not have substance for a case. One of the files contained nothing but two speeches and printouts of posts taken from Zahran’s Hashim’s Facebook page. Could we file a case on the basis of that?

M.A. Sumanthiran: Was there a revision application or bail application in the Batticaloa High Court?

DSG Peiris: Yes, it seems. There had been a bail application. Police objected to the application.

M.A. Sumanthiran: The State Counsel in Batticaloa attended to that case and sent you a report. Did you enter that report in the file you had opened?

DSG Peiris: No, it was in another file. It is in bail application file.

M.A. Sumanthiran: So the two documents in two separate files?

M.A. Sumanthiran: All these reports are about a single issue and single group. Reports on the websites, reports on the street violence and reports on bail applications and several officials are dealing with the same issue and same group and they are three separate files. Is it a system error?

DSG Peiris: It depends on the investigative officers. For example, the CID, they keep in touch with us in investigations. The TID does not have that discipline. There was a time that we did not have contact with them.

Dr. Jayatissa: When was that time?

DSG Peiris: They do not usually cooperate with us. They carry out their investigations. They do not contact us. They claim that they sought our instructions and the AG Department delays the process.

Dr. Jayatissa: A copy of the same letter was sent to the Minister of Justice. Do you remember that the then Justice Minister Dr. Wijeyadasa Rajapakse sending you any reminder or any communiqué with regard to that issue and that letter.

DSG Peiris: No. He sent us many letters on various other issues but not a single letter or reminder on this issue.

M.A. Sumanthiran: There are systemic problems. We are not here to pinpoint or level allegations against others. We know there are many lapses in many departments. To sum up, we all have failed. That was why the unfortunate incidents occurred. That is the truth. We the PSC is here to find what went wrong and to take remedial measures to prevent the recurrence. We may remedy the mistakes.

DSG Peiris: The TID has not mentioned of any terror activities in their reports. They mentioned only of religious violence. The TID did nothing in this regard.

Home » Terrorists can be arrested without AG’s advice – DSG