Thank God for ISIS! – Who Profits from Wars? 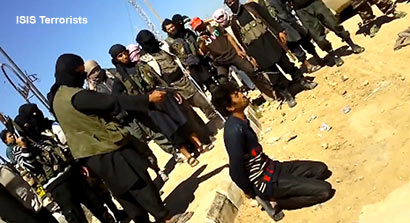 We dont know who they are but the ‘Made in US/UK’ signs are hard to miss. ISIS are the “born again” of the Al Qaeda. The doubt is intensified because the enemies of the ISIS happen to be the very enemies of the West but to downplay that a few Western heads have been chopped. Nevertheless, whoever the ISIS, whoever they are controlled by or from where they take orders, we can well say that they are Muslims fighting against Muslims and that makes it all the more difficult to ascertain what exactly is going on. What we can ascertain is that after a period of lull and when Ukraine is out of financial scope or ability, hey presto ISIS has become the solution and with every terrorist movement emerging we go back to square one of who profits from wars and we should not be naïve not to know that terrorists do not emerge from any inherent grievance of denial or aiming for any aspirations, they are people created to wage mayhem for in so doing a host of opportunities have prevailed to a lot of people directly and indirectly. It is one sordid and selfish reason why no one wishes terror to really stop.

In June 2014, the New York Times posted an article titled “The Lack of Major Wars May Be Hurting Economic Growth”attributing slowness of economic growth in high-income economies concluding that it is because the world hasnt had much warfare lately. The article refers to the Keynesian argument that preparing for war lifts government spending and puts people to work! Also argued is how innovations such as nuclear power, computer, modern aircraft came into fruition in order to defeat the Axis powers and win World Wars. Where Governments fail to summon urgency among masses, war times does the article argues and the example of how the Manhattan Project took just 6 years to produce the working atomic bomb is given. The logic of the article assumes that Western European nations growth are slow because they have no fear of being taken over militarily thus their politicians don’t face extreme penalties for stagnation. Unusual but certainly interesting logic which Prof. Ian Morris of Standford University has highlighted in his book ‘War! What is it Good for?” and says it is good for progress of civilization from primates to robots.

What is true is that the technologies being innovated today are far too dangerous and destructive and the disastrous outcomes are significant for the entire planet including the environment.

The fact is that there are many who believe that wars are opportunities and this list will show you why they think so:

Who profits from wars

This list certainly can be strengthened… but eventually who is the victim…. it is the common man and no one cares about him! Yet post conflict scenarios do offer opportunities as well, at least that is better than innocent people having to die to make a better life for a handful!

Home » Thank God for ISIS! – Who Profits from Wars?